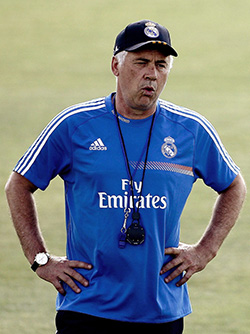 REAL Madrid have sacked manager Carlo Ancelotti with president Florentino Perez saying the club will announce a replacement next week
Ancelotti has paid the ultimate price for a season that saw Real Madrid finish second in La Liga while they bowed out of the Champions League at the semi-final stage to Juventus.
They will end the season without a trophy a year after Ancelotti led Madrid to ‘La Decima’ with their 4-1 win over Atletico Madrid after extra-time in Lisbon.
His last match as Madrid manager was the 7-3 Liga win over Getafe on Saturday.
Real Madrid have now fired nine coaches in 12 years with Napoli coach Rafael Benitez a hot favourite to succeed Ancelotti.
Speculation will inevitably intensify that Madrid will move for Juergen Klopp when he departs Borussia Dortmund after this weekend’s German Cup final, but there is a keenness for the new coach to speak Spanish.
Perez addressed a press conference in the Spanish capital to inform the media that the club had yet to find a replacement for Ancelotti, who was brought in from Paris Saint-Germain in 2013.
“I want to announce to you that the board has taken the decision to relieve Carlo Ancelotti as manager of Real Madrid,” said Perez.
“It hasn’t been an easy decision, but it’s time to give new momentum to the team to conquer new titles.
“I want to publicly thank Carlo Ancelotti for his work during these two years. I’ve been with Carlo Ancelotti before coming here. I can only say that he’s a man, a gentleman, and I understand him.
“The new manager will be known next week. It would be very good if the new manager speaks Spanish.
“The players have manifested the affection they have for Carlo, the same that I have as well as the supporters.
“The shows of support for Carlo Ancelotti seem correct to me. It doesn’t bother me, they’re a display of affection. Madrid’s requirements are of such a nature that we want to achieve our maximum competitive level.
“There is never guilt. The post of manager suffers from deterioration.”
Ancelotti has already gone on record as saying he would take a year’s break from the game to recover from impending back surgery rather than return to his former club Milan, where he won two Champions League trophies as a coach.Advertisement

Manchester City and Liverpool have been touted as possible destinations for him in the Premier League.
Ancelotti departs the post having won the Champions League, Super Cup, FIFA World Club Cup and Copa del Rey, but the prospect of fierce foes Barcelona adding the Champions League and Copa del Rey to their Spanish title as part of a glorious treble has prompted Real to make this latest change.