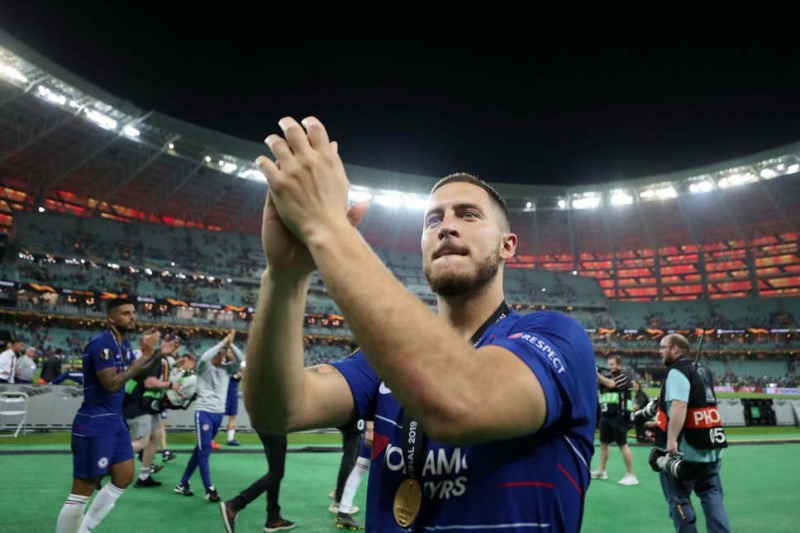 Real Madrid have agreed a deal to sign forward Eden Hazard from Chelsea for a fee that could exceed £150m.

Hazard has agreed a five-year contract and will be presented as a Real player on 13 June, subject to a medical.

The Belgian scored 110 goals in 352 games for Chelsea after joining from Lille in 2012, and scored twice as they won the Europa League final last week.

“Leaving Chelsea is the biggest and toughest decision in my career to date,” said Hazard.

Writing on Facebook, he added: “I hope you understand I had to pursue my next chapter, just as each and every one of you should when you have the chance to pursue your dreams.

“Now it’s in the open I would like to put on record one thing was always clear to me, I have loved every moment at Chelsea and not once did I ever consider, nor would I have left for any other club.”

Chelsea director Marina Granovskaia said: “The memories he leaves us with will not fade.

“He provided all who watched Chelsea play with great entertainment and many match-winning contributions, and for that we thank Eden enormously.

“He has been a model professional throughout his time at the club, a wonderful individual to have around and a joy to work with.”

In seven seasons at Chelsea, Hazard, whose Blues contract was due to expire in a year, won the Premier League and Europa League twice, the FA Cup and League Cup.

He was also named Chelsea’s Player of the Year on four occasions.

“Although it is with sadness we say goodbye to Eden and we made it absolutely clear to him the club wished him to stay, we respect the decision he has made to take on a new challenge in a different country and follow his childhood dream of playing for Real Madrid,” Granovskaia added.

Chelsea have been placed under a transfer ban by Fifa, meaning they will not be able to sign a replacement for Hazard.

The Blues are banned from signing players during the next two transfer windows until the end of January 2020. They failed with their first appeal to football’s world governing body, and have taken their second to the Court of Arbitration for Sport.

When the then 21-year-old Hazard made his highly anticipated move to England in June 2012, the Blues had just been crowned champions of Europe for the first time under manager Roberto di Matteo.

The Belgian, who had also been wanted by Manchester United, hit the ground running with two assists on his league debut and went on to register 13 goals and 23 assists in his first season at Stamford Bridge.

A promising debut season was capped by a first trophy, though an injured Hazard had to watch from the sidelines as interim boss Rafael Benitez – Di Matteo’s mid-season replacement – guided Chelsea to victory in the Europa League.

Hazard won back-to-back player of the season awards following Jose Mourinho’s return to the club in June 2013 – an award he went on to win four times in six campaigns.

An improved 17 goals and 10 assists in 2013-14 was eclipsed by the Belgian’s joint-most prolific season for Chelsea the following year, scoring 19 times in all competitions and being crowned Premier League player of the season as Chelsea won a league and League Cup double.