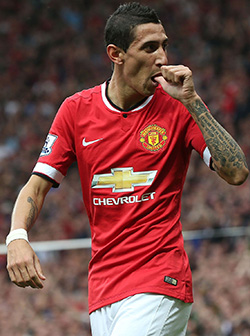 BARCELONA’S assistant director of football Carles Rexach has claimed that Real Madrid sold Angel Di Maria because he was “too ugly” to play for the team.
Rexach’s comments could cause quite a stir between the two bitter rivals, especially with truth behind Di Maria’s departure to Manchester United unclear.
The Argentina winger claimed that he felt undervalued and underappreciated at Real after his request for a new and improved offer at the club were rebuffed despite putting in a man of the match award in the 2013/14 Champions League final.
Real Madrid boss Carlo Ancelotti has since criticised Di Maria, claiming that the 27-year-old left to join Louis van Gaal’s Manchester United for money and nothing else.
However, Barcelona director Rexach has offered his two cents as to why Di Maria was allowed to leave the club, claiming that the winger’s appearance did not correspond with the club’s image.
Speaking to Catalan media Regio7, Rexach said: “Florentino Perez [Madrid’s president] looks at the world market and wants a team of Galacticos for everyone to admire. Do you understand what I mean?
“[Cristiano] Ronaldo is the flagship of the club. Perez is selling an international brand.
“Vicente del Bosque and Di Maria are too ugly for Real Madrid. They are different from Toni Kroos and James Rodriguez.”Advertisement