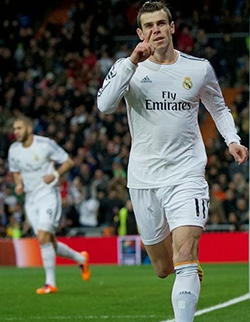 KARIM Benzema struck twice as Real Madrid went to the top of La Liga with a 4-2 win over Villarreal on Saturday while midfielder Verza’s double gave Almeria a shock 2-0 victory over Atletico Madrid.
There was no way through for Atletico who lacked creativity and inspiration against an Almeria side that defended well.
Diego Simeone’s men were reduced to speculative shots while 13th-placed Almeria threatened on the counter attack as the game wore on, with Aleix Vidal hitting a post before Verza put the hosts ahead 10 minutes from the end.
Dani Aranzubia was then dismissed for upending Jonathan Zongo in the penalty area and Verza scored from the spot with four minutes to go.
“We faced a side that did what they had to do. In the first half we made chances to score,” Simeone told a news conference.
“This is what happens in football and we are not going to make any excuses.”
Gareth Bale marked his Real Madrid return after injury with the opening goal and the Wales winger then set up Benzema to give the home side a commanding lead, only to see Mario Gaspar reply for Villarreal before the break.
Jese restored Real’s two-goal cushion and, after Giovani Dos Santos scored a fine free kick, Benzema made it 4-2 as Real showed no signs of missing the suspended Cristiano Ronaldo.
Real and Atletico have 57 points from 23 games but Carlo Ancelotti’s side are top on goal difference. Barcelona, who visit Sevilla on Sunday, are three points behind.
“We knew Villarreal would make it difficult for us and that’s what happened but it’s important to win at home and we’ve managed to do that,” Jese told reporters.
Sharp Bale
Bale robbed the ball off Jose Antonio Dorado and delicately lifted it over the onrushing Sergio Asenjo for the opening goal.
After the stop-start season he has had, Bale looked sharp and he crossed with the outside of his left boot for Benzema to slide home the second from close range.
Real lost Marcelo to injury before Mario fired Villarreal back into the contest as the home team sat back.
Defender Fabio Coentrao also went off injured but Jese slotted expertly past Asenjo as Real regained control.
Giovani’s free kick kept the game tense until Benzema’s second goal 14 minutes from the end.
Atletico suffered their first defeat since October when they were defeated by Real Madrid in the first leg of their King’s Cup semi-final on Wednesday and the strain of that match seemed to take its toll on the team against Almeria.Advertisement

The visitors struggled to create and a couple of Diego shots from the edge of the penalty area that went narrowly wide was the best they could offer in the first half.
Almeria posed little threat until Vidal’s effort hit the woodwork prompted a warning that Atletico failed to heed.
Verza’s intended cross crept into the top corner for the opening goal before the same player clinched maximum points with his penalty.
Earlier, eighth-placed Valencia thumped rock bottom Real Betis 5-0 with Alcacer scoring twice. Second from bottom Rayo Vallecano also defeated Malaga, who are in 14th spot, 4-1.