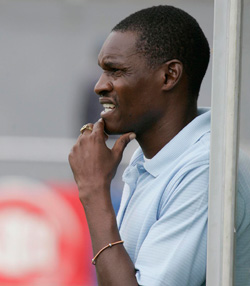 ZIMBABWE champions FC Platinum got a reality check ahead of their trip to Angola for a Caf Champions League show down against Deportivo De Agosto on Tuesday after they were hammered 4-0 by visiting Zambian side Zanaco on Tuesday.
Having managed to overcome Ferroviario of Mozambique at the weekend, Norman Mapeza’s men were expected to build on that performance but they were taught a harsh football lesson by the Zambian side and will now have to roll up their sleeves in their next match to boost their confidence ahead of the trip to Luanda.
Veteran forward, Mkokeli Dube, had scored the only goal against Ferroviaro leaving Coach Joas Antonio Chisano to conclude that FC Platinum will win the prestigious tournament.
Mapeza’s men are also scheduled to wrap up their preparations with another friendly against Nkana Devils, as they gear for their Caf Champions League preliminary round tie away to Angola.
FC Platinum travel to Luanda for the preliminary round first leg on the weekend of February 9-11, before hosting Deportivo Lero Agosto seven days later.
If they manage to overcome the Angolans, they will face the winner between South African side Bidvest Wits and Pamplemousse of Mauritius in the first round, with the victorious team qualifying to the group stages.Advertisement