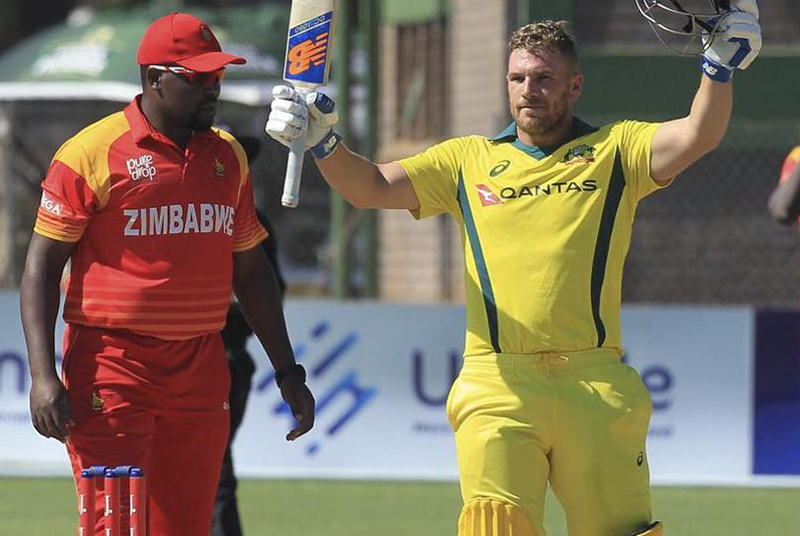 HARARE: Australia captain Aaron Finch revelled in his record-breaking innings against Zimbabwe, saying it was “up there” as one of the best innings he has ever played.

Finch powered his way to 172, beating his own world record high score in Twenty20 Internationals. Finch and fellow opener D’Arcy Short put on 223, another world record.

Australia reached 229 for two, the highest total ever scored against Zimbabwe in a T20 international as a slew of records were broken during Australia’s 100-run victory.

“It’s nice to break my own record,” said Finch. “Satisfying. It’s something that I’ll look back on when I’ve finished playing and be really proud of.” Finch cracked his first six in the fourth over of the morning, and with his third he brought up a 22-ball half century – his fastest in Twenty20 internationals.

Australia took 75 from the Powerplay, with Finch doing the bulk of the scoring while fellow opener D’Arcy Short was content to turn the strike over to his big-hitting partner. Finch brought up his second T20I hundred at the end of the 14th over, taking just 50 deliveries.

Four overs later, his 15th four took Australia’s score to 200, and he then moved beyond 150 with a swipe to deep midwicket. He moved beyond the previous world record high score of 156, which he scored against England in 2013, with his ninth six.

Short eventually fell swinging across the line at fast bowler Blessing Muzarabani to be caught for 46, while Finch fell in bizarre circumstances in the final over. Stretching out to hit a full delivery from Muzarabani, he over-balanced and kicked his own stumps to be out hit wicket.

“I thought he was going to go with a wide slower ball, so I got back,” said Finch.

“I realized out of the hand that it was a touch wide, so I actually went to let it go and probably just didn’t realize how far back onto my stumps I got. Disappointing not to be not out at the end.”

It appeared Zimbabwe might make a fist of their chase when openers Solomon Mire and Chamu Chibhabha rushed past 40 in the fourth over, but once they were dismissed regular wickets quickly stalled the innings.

Left-arm spinner Ashton Agar raced through four overs while conceding just 16, while Andrew Tye’s seamers were even more effective. He took three for 12 as Australia inflicted one last record against the Zimbabweans, the hosts slumping to their largest ever defeat in T20Is.

Australia have now won two games on the trot following from a disastrous tour of England, and Finch suggested that the change of scenery and opposition had made a big difference.

“The mood in the camp has always been really positive, and I think coming here we’ve brought that confidence that we had, but probably with a bit more self belief coming into a new tournament against two sides that we haven’t played for quite a while compared to a team that dominated us last summer in Australia and then did so again.

“So new opposition and new environment has made a difference here so far.” Australia take on Pakistan on Thursday, and Finch insisted there was no room for complacency.

“Complacency? Absolutely not,” he said.

“We know Pakistan are a world class side. They’re number one for a reason. They’ve got a lot of bases covered, so you’ve got to turn up each and every day and be 100 per cent against them otherwise they’ll hurt you.”