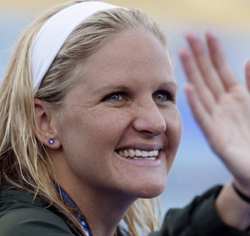 DON’T let you circumstances limit you on everything you want to do in life said Zimbabwean swimmer and former world record holder Kirsty Coventry.
“You have an opportunity to be whoever you want to be,” she added.
She said this when she received an honorary Doctorate of Philosophy Degree in Sports Science from Bindura University (BUSE) at the institution’s 16th graduation ceremony Thursday.
Her mother Lyn who received the honorary degree on her behalf said her daughter was excited to be honoured and would have loved to be part of the ceremony but had left for United States of America to attend an International Olympic Committee meeting.
BUSE vice chancellor Prof Eddie Mwenje said this was the first time such an athlete had been honoured at the institution and described Coventry as a remarkable sportswoman.
“Bindura University of Science Education, the host of the Zimbabwe Sports Academy, has seen it fit and worthwhile to award honorary doctorate to a hard working servant, illustrious, dedicated, patriotic and a disciplined athlete,” said Prof Mwenje.
Kirsty, at the 2004 Summer Olympics in Athens, won three medals-gold, bronze and silver. In 2008 Summer Olympics in Beijing, she won gold, silver and bronze.
She was later awarded $100 000 in cash by President Robert Mugabe and also named the Zimbabwe Sports Woman of the Year.
Her other awards include 2005 Southeast Conference (SEC) Swimmer of the year, 2004-5 SEC Female Athlete of the Year.
She is also a recipient of 2004-5 Honda sports award for swimming and diving recognising her as the outstanding college female swimmer.
At the 2005 World Championship in Montreal, Coventry improved on her Olympic medal count by winning gold in both 100 and 200 m backstroke and silver in 200 m and the 400m.
Her performance allowed Zimbabwe to rank 3rd in the medal count by nation.
At the 2007 World Championship, Coventry won silver medals in 200 m backstroke and 200m and in the same year, at International Swim Meet in Narashino Japan, she won four gold medals.
In 2008, she broke her first world record in 200 m backstroke at Missouri Grand Prix becoming the third woman in history to break the 1:00 minute barrier in 100 m backstroke and the second to break the 59-scecond barrier.Advertisement