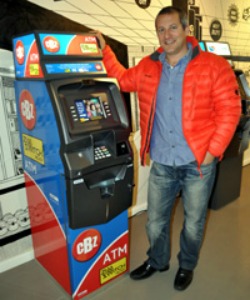 IT wasn’t too long ago that Zimbabwe was facing a crisis of extreme inflation that left the economic and business landscape broken.
In 2008 hyperinflation in Zimbabwe was recorded at a peak of 231 million per cent and the country, once dubbed the breadbasket of sub-Saharan Africa, saw businesses collapse and unemployment rise to 80%.
Since then, Zimbabwe has adopted the US Dollar as its main currency and according to Marc Sternberg – managing director of South African based deployer of independent in-store automatic teller machines (ATMs), Spark ATM Systems – the economy is recovering steadily.
The company has recently established its first African subsidiary in Zimbabwe, in partnership with CBZ Bank Limited, the country’s largest retail bank. In an interview with How we made it in Africa, Sternberg explained that he sees this entry into the market as a long term investment.
“Things are picking up but far from flying,” said Sternberg.
“So [business] people moving there now must have a bit of patience and they have got to have runway – they can’t have a short runway and expect results in six months. I think that there is a two to four year story there but I think that if you have got the patience – and you are happy to build and you are happy to wait and watch slow progress – I think 24 months out from here there could be some exciting stuff happening there, and some good rewards.”
While Sternberg is eyeing a couple of other African countries for business expansion, he said the Zimbabwean market had a number of factors that made it an attractive business destination for Spark ATM Systems.
Underserviced market
Sternberg estimates that there are only 400 ATMs in Zimbabwe, of which he thinks maybe half are working. These are bank ATMs typically at bank branches.
“There has been maybe a 10 year period in some of these cases that the machines have just been off. I mean, literally, I saw machines with cobwebs on them and I’ve never seen that before,” said Sternberg.
“Also, regulatory wise, there have been a lot of changes in the last five years… [which] mean that if you are sitting with old hardware pre-2005, you’re dead; you can’t use it. You have to swop out all that hardware.”
Currently, Spark ATM Systems have close to 20 ATMs in Harare, with the next batch of 20 soon to be delivered. By the end of the year, Sternberg aims to have 100 ATMs across the country.Advertisement

“My gut feeling at the moment is that if we could get up to 1,000 ATMs in the country within 36 months, I think that would be a decent level and we would have pretty good saturation,” he explained.
Sternberg said their business model relies on the existence of retail infrastructure as they only offer in-store ATM machines, as opposed to standalone ATMs in a parking lot. These ATMs rely on the power, security, and customer foot traffic that goes through the retail premises.
“So an established retail sector is key and the Zimbabwean retail sector is actually booming at the moment,” said Sternberg.
“There is a huge amount happening. Spar is very active… Pick ‘n Pay has just increased their stake in TM Group. The petroleum sector is very active. Total, Engen, BP, have all got significant presences in Zimbabwe and they have added the petroleum forecourt supermarkets, like we see in South Africa.”
Established sector
Sternberg added that they face no competitors in Zimbabwe and are the only company offering convenient, in-store ATMs.
There are a number of South African based companies operating in Zimbabwe, which Sternberg said has made the entry into the market easier.
A proven track record with their South African clients, such a Spar, Fruit & Veg City, Total and Engen, have paved the way to introductions and partnerships with these companies’ Zimbabwean subsidiaries.
The other critical factor that makes Zimbabwe an attractive market for Spark ATM Systems is the presence of an interbank switch.
Zimbabwe has a national electronic funds switch, called ZimSwitch, which processes all financial transactions and enables clients of participating banks to withdraw money from participating ATMs from another bank.
“So what I’m talking about here is the inter-operability between the banks where bank A’s customer can use bank B’s ATM, and bank C’s customer can use bank D’s ATM,” continued Sternberg.
“So all the banks are effectively not standalone entities running their own independent ATM networks, and settlements and fees… but it’s an integrated network.”
“I think our biggest challenge in Zim at the moment is the whole economy, consumers and business included, have developed quite a big fear of the banking sector because of what has happened there in the last five to eight years,” explained Sternberg.
“You know, Zimbabwe – if you rewind the clock a dozen years – actually had a very advanced banking sector by African standards. I mean it was probably right up there in the top five on the continent.”
However, Zimbabwe’s hyperinflationary period meant that a lot of people lost money by having it in the banking sector.
Trust in banks
Sternberg added that many Zimbabweans are still scared to put their money back into the banking sector. This is a challenge for Spark ATM Systems as their business relies on people having bank balances which they access through withdrawing cash from ATMs.
“It’s not a quick win at all – the place is very much re-gathering itself,” said Sternberg.
“But what I like about Zim is that they have done it before, whereas other African countries have never done it… So I always use my golfing analogy; you know if you get on the golf course with a guy who has never played golf, chances are he is going to have a bad round.
If you get on the course with a guy who used to be good at golf, but hasn’t played in a while, it will take him a few holes. But by the seventh or eighth hole you will see he is playing good golf again. Its muscle memory.
So I think in Zimbabwe there is a similar muscle memory and the people know what they can achieve if they just apply their minds and they build as a country, and I definitely think they will get there… and I really think what we do does help.”
Sternberg said he believes that there are a lot of opportunities and capabilities in the Zimbabwe banking sector, but it’s a matter of getting people to trust in it again.
“So I think it will take time, but it’s definitely on the up there. There are huge moves by government and the banks there to get this gaining momentum,” he continued. “The next two years will be interesting.”