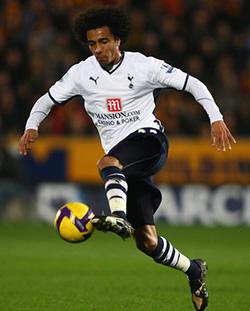 The 70-year-old says he has been offered the chance to bring the Cameroon defender, who he worked with at Tottenham and QPR, to St Andrew’s.
Assou-Ekotto is out of contract with Ligue 1 side Metz and Redknapp has already been offered the 33-year-old ahead of next season’s Sky Bet Championship campaign.
A jovial Redknapp told the Spurs Show podcast: “I got a phone call, ‘Mr Redknapp I have a fantastic player for you, one of your old players, Benoit’.
“I’m thinking, ‘yeah’, somewhere inside you think ‘I can get him going again’. The only trouble is that he’s admitted he wants to be a porn star.
“Maybe I can get another year out of him before he decides to do that.
“What a good player. He could well end up in the Birmingham colours next year, Benoit.”
Assou-Ekotto made 205 appearances for Spurs, leaving to join St Etienne in 2015, and also played for Redknapp at QPR during the 2013-14 season.
He made 19 appearances as Metz finished 14th in Ligue 1 this season.
Assou-Ekotto, who has previously said he plays football for the money and described it as “only a job”, has been contacted for comment by Press Association Sport.