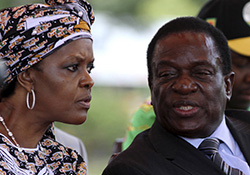 FORMER Tottenham and Portsmouth manager Harry Redknapp appeared to mock the now retired Zimbabwean striker Benjani Mwaruwari at the weekend.
Redknapp was on UK TV channel BT Sports show Fleth & Sav talking about his extensive experience of the January transfer window.
He said it’s difficult to find good value during the window, but recalled one incident where he managed to make a steal when he somehow sold Benjani to Manchester City for £9.5 million.
Back in the 2007/2008 Premier League season, the Zimbabwean striker was in excellent form for Portsmouth, scoring 12 goals in 27 games.
Redknapp brought Benjani to the Barclays premiership from France on the recommendation of Arsenal coach Arsene Wenger.
However, when City made their interest known for the then 29-year-old, Redknapp couldn’t refuse the money on offer.
The only problem was convincing Benjani to leave.
“I had to shove him out of the door,” Redknapp said.
It’d prove good business for ‘Arry as Benjani only scored seven goals in 31 games for City.
Watch video below:
Redknapp: I had to shove Benjani out the door