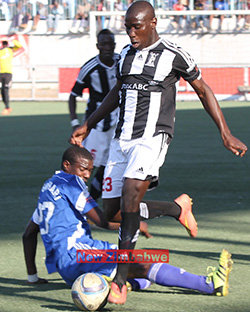 BONGANI Gadzikwa has been suspended by the Zimbabwe Referees Committee for his horrendous blunder that denied Highlanders a goal against Dynamos in their 3-2 loss in a Castle Lager Premiership match at Rufaro on Sunday.
Gadzikwa adjudged that Edwin Muzanenhamo had scored in the 78th minute from an offside position, although television replays clearly showed that there was no offside. Dynamos were leading 3-2 at that moment.
In the wake of that decision, the committee, after reviewing the match and receiving the match commissioner’s report, decided to wield the axe on Gadzikwa on Monday afternoon.
In a statement, the ZRC said: “We have taken note of the issues at hand and came up with a decision to suspend the match official who was responsible for offside on the day of the game.
“Investigations, meanwhile, are continuing.”
Bosso scored the opener just six minutes into the game through Knox Mutizwa who converted from the penalty spot after Augustine Mbara pulled down Obadiah Tarumbwa in the penalty box and referee Norman Matemera awarded a penalty.
However, Chitiyo levelled after six minutes and then completed his brace in the 19th minute, drilling the ball home in a crowded box after Masimba Mambare’s initial attempt had been blocked by Highlanders goalkeeper Arial Sibanda.
Barely a minute after the substitution, Mutizwa completed his brace with a superb header from a free kick by Muzanenhamo to level matters before Qadr Amin pitched  up from the blind side to restore the lead in the 73rd minute.
Five minutes later, Muzanenhamo had the ball in the back of the nets but Gadzikwa, from the blue, ruled it for offside. Video replays on SuperSport clearly showed there was no offside.