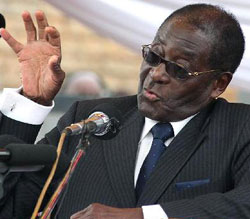 WHEN President Robert Mugabe assumed office in August 2013, it was on the back of an election campaign promise to deliver 2 million jobs to Zimbabweans. Two years later, and thousands of jobs fewer than there were when that promise was made, the one area that has actually experienced growth is the size of his government.
Last, Zimbabweans woke up to the shock of an additional set of Ministers – 14 were sworn into office. Although there were some vacancies arising from deaths, dismissals and re-assignments, the rest were new posts that were previously unoccupied. Their necessity is a point of serious doubt, especially in this period when the government is struggling for cash.
One of the new ministries is for “Rural Development and Preservation of National Cultural Heritage” – which has left some speculating that it was prompted by the recent furore over the return of skulls taken during the colonial era. But there is the Home Affairs Ministry, which was already responsible for that area. There is also a Tourism Ministry, which has an interest in the same area of cultural heritage. Why a new full ministry was considered a necessity in these austere times defies sense.
The President has created a third economic-related portfolio, reassigning Simon Khaya Moyo to the Ministry of Policy Coordination and Promotion of Socio-economic Ventures in the President’s Office. Khaya Moyo’s old ministry of economic planning has now been taken over by Obert Mpofu, formerly at Transport. It’s not altogether clear what Khaya Moyo was doing at Economic Planning or what he will be doing at his new station. It seems the President is unsure of what do with Khaya Moyo, who at one point was almost a sure bet for the Vice Presidency until he was pipped at the last moment by Phelekezela Mphoko, whose political pedigree before his appointment was obscure.
Anyway, Khaya Moyo’s old ministry has now rather incredibly also gained a deputy in Monica Mutsvangwa, moved from Information where she was also deputising. These two Ministries – Khaya Moyo’s and Mpofu’s – are in addition to the main portfolio dealing with economic affairs, Patrick Chinamasa’s Ministry of Finance. There is also industry and commerce, which understandably is a separate ministry. But why you need all these economic ministries disjointed and scattered all over the place for such a small country and economy is hard to understand. They are departments which Chinamasa should be in charge of at Finance.Advertisement