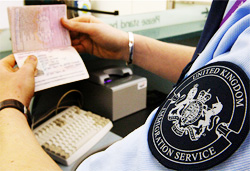 A NEW production, Rule 35, looks at the experiences of female asylum seekers and refugees held in government detention facilities, and gives the audience a taste of cell life
MAVIS spent three months ‘inside’. She couldn’t leave, she lost all her possessions and she lived regimented days at the orders of the guards.
This experience was not in a prison but in Yarls Wood detention centre, home to thousands of refugees and asylum seekers waiting to find out if they are able to stay in the UK.
Mavis is originally a shop owner from Zimbabwe, and she came to England on a tourist visa to visit her doctor daughter, who was living in Devon.
She spent her time in detention in 2012, during which she was stripped of all her possessions, forced to endure the agony and humiliation of solitary confinement (where she was put following hospital treatment for an allergic reaction to medication) while watched over by a male officer, and had no option but to stage a sit in at the warders’ office when she was assigned a room-mate she was scared of.
This Saturday, she’ll be acting as a warden in a new 45-minute long immersive production from Community Arts North West based on the experiences of women living in the UK’s detention centres.
The audience will get to experience what it’s like to be confined to a cell and “get treated worse than criminals”, according to director Cheryl Martin.
Specifically the play addresses the systemic failure of some detention centres to honour the provisions of Rule 35 – government guidance that requires a doctor to decide if continued detention in a centre will be injurious to a person’s health.
“I doubt if the British know about this,” says Mavis about the conditions she endured.
“Because if they knew, they would be doing something about that.
“I know people out there could not stand such things to be done to a human being.”Advertisement