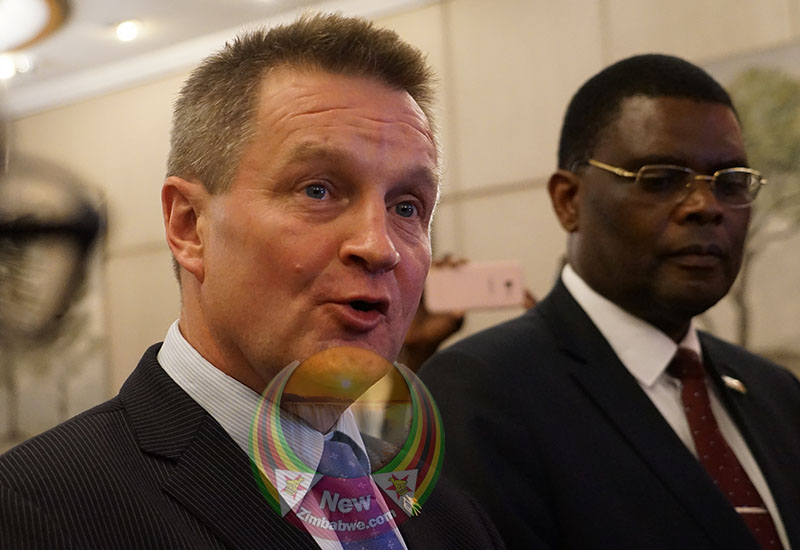 OUTSPOKEN EU ambassador to Zimbabwe Timo Olkkonen has accused the Zimbabwean government of attempts to divert attention around its poor human rights record through building conspiracy theories on an alleged western plot to effect regime change in Zimbabwe.

The diplomat was speaking at a panel discussion at SAPES Trust on Thursday.

Olkkonen was co-panelist during a Thursday SAPES Trust discussing on the topic, “The deepening crisis in Zimbabwe, what is to be done now?”

The Emmerson Mnangagwa government has come under spotlight for all the wrong reasons following rampant abuses on protestors and alleged abductions on government critics by the State.

The heavy-handed police reaction invited strong condemnation from the West with Harare authorities dismissing the comments as motivated by a ‘regime change’ plot against the under-fire Zanu PF led administration.

Said the EU diplomat, “…We have serious concerns about human rights abuses and civic liberties.

“It was important for us to come out in public from an EU perspective, because we want Zimbabwe to succeed.

“I have seen all kinds of conspiracy theories about how we have an agenda of trying to foil efforts of making Zimbabwe prosper and all kinds of ill statements. Obviously these kinds of pointers are smoke screens for diverting attention from other issues.”

Added the diplomat, “Why on earth would EU want Zimbabwe to fail! That is the question and we would want to see a prosperous Zimbabwe being an interesting partner in its own right in matters of trade, investment but also in terms of the stability and influence it can have in the southern African region and the continent as a whole.

“So, that is our hope; that’s why we are all partnering with Zimbabwe. We are directing a large funding on humanitarian crisis to that effect and that’s also beyond our political dialogue with the government and other stakeholders.”

Olkkonen said the EU’s concern was to see behavioural change in Zimbabwe.

He denied accusations the western bloc favoured the opposition.

“…We don’t have any partisan agenda. We are not favouring any political party,” he said.

The Mnangagwa led government, which came off a coup against former President Robert Mugabe, has seen its international image take a knock following episodes of rights violations against civilians.

Not less than 20 civilians have died in the hands of the military and police between August last year and January this year in a brutal reaction to citizen protests.