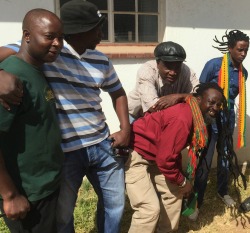 LISTENING to the track, “Medley,” on their upcoming album one can sense or feel the reincarnation of Kwekwe’s legendary group, Zig Zag Band.
According to the manager of the new ensemble, Simbarashe Gunde, Bass Combo is a “remnant” of the old Zig Zag band as it is composed of the younger brothers of the older crew.
Bass Combo, Gunde said, plays an infusion of traditional and modern music.
Band elder, Madison Phiri, known as TBR in music circles, had a stint with the original group. He said the new group is carrying forward the Zig Zag Band legacy and Chigiyo music.
A reggae-like beat fused with traditional rhythms to produce a uniquely Zimbabwean sound, Chigiyo music catapulted the original Zig Zag Band to stardom.
Famed for their popular 1987 song, Gomo Ramasare, the original Zig Zag was formed in 1982 and has eight albums to their name with the last recording in 2013.
According to Zig Zag originators, Chigiyo music is a reflection of cultural norms and values through song, which they say can summon the spiritual realm to the attention of the living.
Although it has infused Chigiyo with modern beats, the new group have not departed far from the footsteps of the original Zig Zag style.
Top music producer, Clive Mono Mukundu, is producing the new group’s three songs which include Jee and Toridhovoza.
“The group was formed last year in July we are celebrating our anniversary. It was our hope that we were going to release our album on our anniversary but we have faced financial constraints,” Phiri said.
Phiri said they are aiming at releasing an album which is yet to be named before year end.
The group has bassist Tonderai Chipwanya, vocalists Ignatius Zawa Nkomo and Simbarashe Gunde, Emmanuel Nkomo, Shadreck Nyirongo, Manfred Mahati, Madison Phiri, Blessed Phiri and David Phiri.
The original Zig Zag was founded by Gilbert Zvamaida, Emmanuel Nkomo, Davison Gunde, George Lunga, Stanley Phiri and Fibion Tinobayana.
“In the song Medley we are retracing our roots. We are looking at where we came from and that is Zig Zag band which was founded by our brothers,” said Bass Combo’s publicist, Nyirongo.
The track is an infusion of two tracks from the old Zig Zag group-Chaita Umwe and Forward Ever.
Advertisement