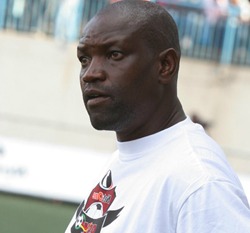 FC Platinum 2-1 Caps United
FC PLATINUM coach Lloyd Mutasa heaved a huge sigh of relief as he finally won his first Castle Premiership match against a fighting Caps United at Mandava on Saturday.
After absorbing pressure from the Green Machine, Donald Ngoma broke the deadlock after 41 minutes from close range.
Two minutes later, it was 2-0 as the Caps defence went to sleep allowing Qadr Amini to score directly from a corner.
But the match was then set for a frantic finish as Dominic Chungwa pulled one back in the 86th minute.
However, in the three minutes of added time, Caps came guns blazing but Platinum held on for a win.
Caps coach Taurayi Mangwiro was not happy with the result and match officiating.
“We played very well right from the start and created many chances, but we failed to convert. We conceded two soft goals including that corner but the refereeing was also poor.
“Most of the decisions went against us even though it was clear those were our free kicks,’ said Mangwiro who accosted the referee Masakadza Makonese after the match.
Caps team manager Luis Maio also officially complained to the match commissioner after the game.
Mutasa was naturally elated.
“I am happy we finally came right but you could see that there is a lot of work that needs to be done.
“We also lose concentration towards the end of the match and that is cause for concern. We will continue to work on our weaknesses,” Mutasa said.
At Luveve in Bulawayo, Bantu Rovers handed Chapungu their first defeat of the season with a 2-0 win.
Obadiah Tarumbwa scored within 60 second of the start before Nqobizitha Ncube added the second in the 16th minute.
In an early kick off Black Rhinos downed Moses Chunga’s Chiredzi FC 2- 1 at Rimuka in Kadoma.
On Friday, How Mine recorded their first win of the season with nervy 2-1 victory over Shabanie Mine at Luveve.
Mernard Mupera and George Magariro scored for the Bulawayo side while Ashley Mukwena was on target for Shabanie.
Results & Fixtures
Friday: How Mine 2-1 Shabanie Mine
Saturday: FC Platinum 2-1 CAPS United (Mandava), Black Rhinos 2-1 Chiredzi (Rimuka, SS), Bantu Rovers 2-0 Chapungu (Luveve).
Sunday: Highlanders v Hwange (Barbourfields), Triangle United v Chicken Inn (Gibbo), Dynamos v Harare City (National Sports Stadium, SS), Buffaloes v ZPC Kariba (Sakubva)Advertisement