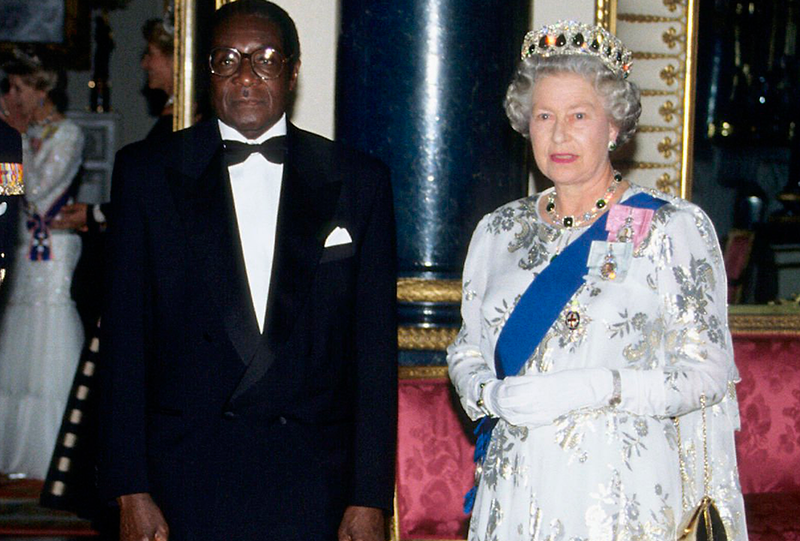 HARARE: Queen Elizabeth II had a complicated history with Zimbabwe and it is impossible to discuss the monarch without remembering the dark history of colonisation.

Diplomatic relations between Britain and Zimbabwe, a former British colony, were always complex.

At the age of 21 in April 1947, the then-princess made her first royal tour of Southern Rhodesia with her parents —  the Queen Mother and King George VI and her sister Princess Margaret.

On the visit Princess Elizabeth was presented with “The Flame Lily Brooch” —  the flame lily being the country’s national flower. The diamond and platinum brooch was commissioned as a 21st birthday gift for her from the children of Southern Rhodesia.

In 1960, the Queen Mother visited the former colony for the official opening of Kariba Dam and toured the country’s Eastern Highlands, a place the Queen Mother described as “nowhere more beautiful in Africa”.

During a break from the engagements, the royal couple were hosted by author CM Elliott and her husband Alan at their Touch the Wild Lodge near Hwange National Park. Elliott told TimesLIVE the queen was “brilliant company [with a] cheeky sense of humour”.

“We were excited at having been chosen to host the couple but had no idea what to expect. We weren’t asked to produce anything special, no exotic requirements, no new linen, no paint job. ‘Carry on as normal,’ we were told and so we did.

“It was obvious Queen Elizabeth and Prince Philip were wildlife lovers. They were enthralled by the presidential elephants and Alan’s extraordinary relationship with the family groups. They recounted later that they had never been so close to elephants before.

“The queen was particularly self-deprecating, and a witty conversationalist. Her laughter was sparkling and joyous, her zest for life enviable … it felt as though we were having dinner with close friends and had to remind ourselves that we were in the company of the most famous woman in the world,” Elliott told TimesLIVE.

Amid the glorious days of the queen’s visit to Zimbabwe, former president Robert Mugabe, a dedicated Anglophile, enjoyed cordial relations with the monarch.

Mugabe was awarded an honorary knighthood by Queen Elizabeth II in England in 1994. But the relationship between the two turned sour, Mugabe was stripped of his knighthood in June 2008 over human rights abuses.

After coming to power through a military coup that ousted Mugabe in November 2017, President Emmerson Mnangagwa tried to mend the ties with Britain.

In May 2018, he wrote to the Commonwealth expressing Zimbabwe’s willingness to return to the organisation but his efforts proved fruitless.

Mnangagwa, who is still trying to mend ties with Britain, sent a message of condolence to the people of the UK and the royal family upon the queen’s death.

“My deepest condolences to the royal family, the people of the UK, and Commonwealth as they mourn the death of Queen Elizabeth II. May she rest in peace.”