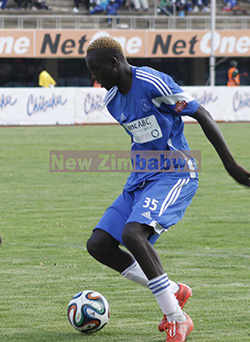 TEMPERAMENTAL Dynamos striker, Rodreck Mutuma, has issued an apology to Highlanders forward Ralph Matema after kicking him during the high pressure Easy Call Cup semi-final on Sunday.
Dynamos lost 1-2 but finished the match with 10 men after Mutuma was given a straight red by referee Ruzive Ruzive for kick out at Matema at the death.
His dismissal has riled coach Tonderai Ndiraya and the club management who have hinted they could slap Mutuma with sanctions. But a remorseful Mutuma on Tuesday apologised to Matema and the sponsors for his actions.
“I was coming from injury and when he tackled me and with the referee not blowing I felt so bad at the moment and I ended up kicking him.
“Matema (Ralph) is my big brother. I want to say sorry to him, the sponsors (NetOne), ZIFA, PSL, the fans, my teammates and my technical bench.
“It was a big game and it raises emotions and all I am saying is I’m sorry to the football fraternity,” said Mutuma.
“The game last Sunday was a big game and I was happy with officiating from Ruzive Ruzive and his team. The officiating was excellent and the fans were a marvellous lot.
“It was painful on our side to go out of the cup as I was hoping to get a medal. I wish the remaining teams all the best,” Mutuma said.
However, his future at the club remains uncertain for kicking out at Matema in retaliation for being pulled back by the striker with a minute remaining on the clock. It is also alleged that Mutuma spat at Matema.
Ndiraya expressed anger at the way his striker got himself sent off for the senseless foul –  conduct which has drawn widespread condemnation from football fans and administrators.
The club’s hierarchy, who stood by Mutuma throughout last week to ensure he played on Sunday, and even threatening a tournament boycott, felt betrayed by the striker.
Secretary-general Webster Chikengezha yesterday said they would sit next week to decide on the course of action.
“It’s a slap in the face for some of us. Nobody is happy with his behaviour and as a club we don’t condone such,” he said.
“We will meet as a club next week and see what we can do about it.”
Ndiraya is believed to be ready to release the striker in the off-season if he retains his post as coach.
“I didn’t expect something like that from a senior player like him, especially after the circus throughout the week,” said the coach.Advertisement

“The management fought for him to get back into the team, but then he goes on and gets a silly red card. We will have to sit down and do something about it.
“We can’t allow that kind of behavior.”