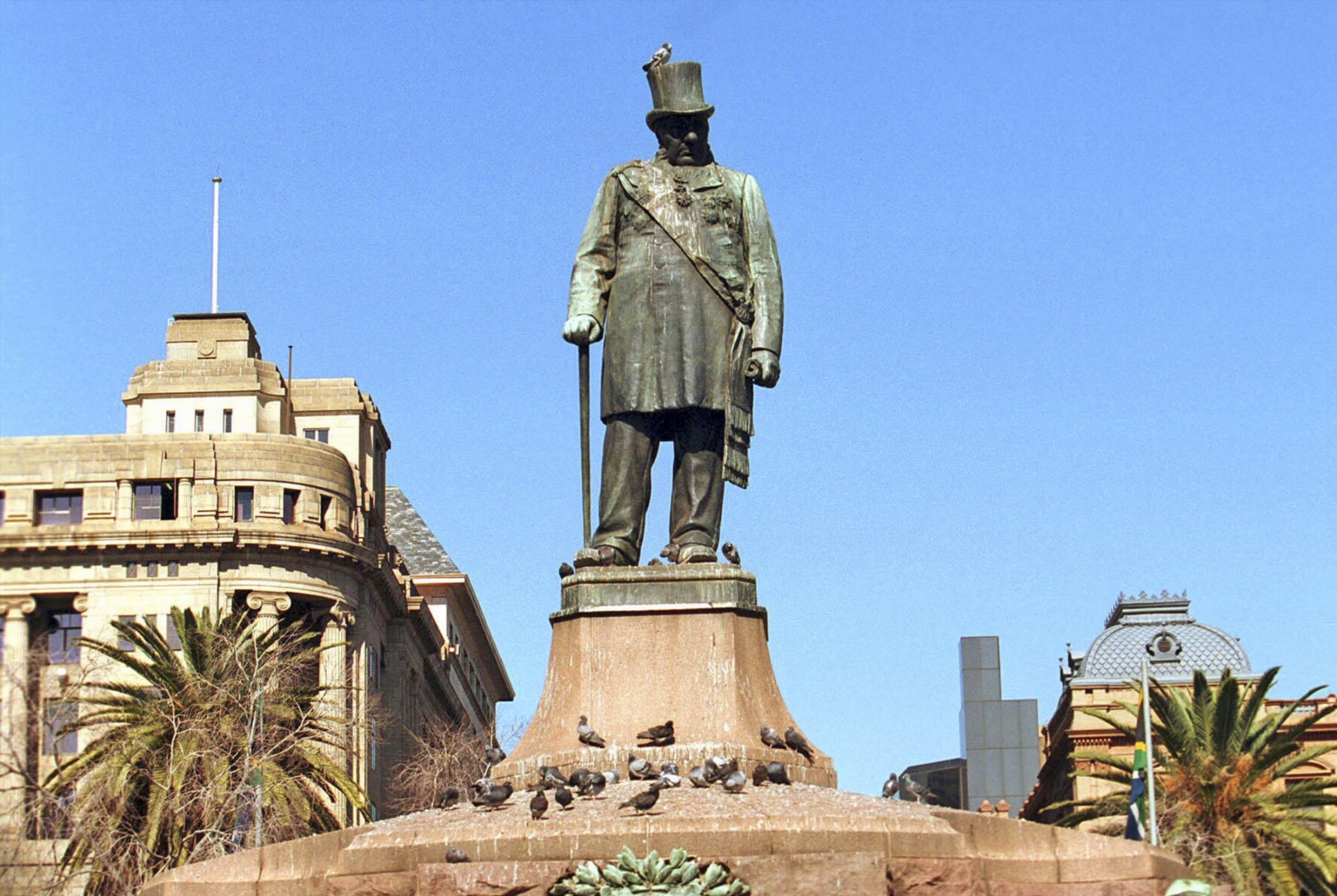 A statue of the late Paul Kruger, top, in Church Square, Pretoria, South Africa. Nearly 25-years after the end of white minority rule, the statue of Paul Kruger stands testament to South Africa's harsh past, but also stirs deep divisions about whether the statue should remain or be scrapped.

JOHANNESBURG : A hulking statue of a late 19th century white leader, with a cane and top hat, has been a flashpoint for cultural conflict in South Africa for years. Black protesters threw paint on it. White supporters rallied around it. Authorities surrounded the statue with barbed wire and then ringed it with a more permanent fence.

Nearly 25 years after the end of white minority rule, the statue of Paul Kruger still looms in Church Square in the center of Pretoria, South Africa’s capital. The tussle over its fate goes to the heart of a discussion over whether relics of white domination should be scrapped or kept as reminders of a harsh past. It is also a test of Nelson Mandela’s dictum that the black majority’s former oppressors should be embraced, not punished — an approach viewed as too generous by some South Africans.

The arguments echo similar ones in the United States, where some monuments to the U.S. Civil War-era Confederacy have been removed after protests and vandalism.

“The removal of a statue isn’t the end of the conversation” about legacies of the past, said Nicole Maurantonio, an academic at the University of Richmond in Virginia who is working on a book about how the Confederacy is remembered today. She spoke on the sidelines of a forum titled “Falling Monuments, Reluctant Ruins,” held last month at the University of the Witwatersrand in Johannesburg.

Maurantonio questioned the rapid clean-up of vandalized monuments such as a Richmond statue of Confederate Gen. Robert E. Lee that in August was smeared with red paint and the letters “BLM,” a reference to the Black Lives Matter movement. By quickly removing the protest graffiti, the city had engaged in a “strategic forgetting” of its past of white domination as well as ongoing racial problems, she said.

During 2015 protests in South Africa, excrement was thrown on a University of Cape Town statue of British imperialist Cecil John Rhodes that was eventually removed. However, another Rhodes statue still stands in Company’s Garden, a city park. A South African foundation named after both Mandela and Rhodes announced 2019 scholarships last month, reflecting how uneven the effort to erase symbols of a nuanced past can be.

Rhodes, who died in 1902, was a segregationist who made a fortune in mining and grabbed land from the local population but was also associated with education and philanthropy. Kruger, who died in 1904, represented the Boers, who were mainly descended from Dutch settlers, at war with the British. The Kruger statue in Pretoria was unveiled in 1954 by D.F. Malan, a prime minister who championed apartheid, the institutionalized system of racial repression

“What do we do with the detritus of apartheid, which has been a preoccupation of the last more than 20 years?” said Cynthia Kros, a heritage expert at the University of the Witwatersrand. After white minority rule, she said, “there was not really an idea to destroy that, but to try and right the balance, to add the kinds of heritage that acknowledge other people in South Africa as well.”

In its last annual report, South Africa’s state heritage agency said it was focusing efforts on sites relevant to previously marginalized people, including the wreck off Cape Town of a Portuguese ship that was carrying slaves when it sank in bad weather in 1794. Many of the more than 400 Africans on board died.

Some of South Africa’s more painful reminders of racial repression have been removed. In 1997, John Vorster Square, where apartheid-era police abused and tortured suspects, was renamed Johannesburg Central Police Station and a bust of Vorster, a former white leader, was removed.

South Africa’s biggest wildlife park, though, is named after Kruger and his statue survived a recent refurbishment of Church Square. At an October ceremony, Solly Msimanga, mayor of the Tshwane metropolitan area that includes Pretoria, said authorities might add sculptures commemorating the fight against white domination.

He noted that there are statues of both Mandela and Louis Botha, a white South African leader in the early 20th century, at Pretoria’s hilltop Union Buildings, home to the South African president’s offices.

“You can actually have perpetual discussion around them and that’s part of what is happening here at Church Square,” Msimanga said, according to the Pretoria News newspaper.

Sunday marks the fifth anniversary of the Dec. 16, 2013 unveiling of a statue of Mandela at the Union Buildings, an occasion ending 10 days of mourning after his death. It replaced a much smaller statue of Barry Hertzog, prime minister of the white South African government before World War II.

Hertzog’s statue was moved to another spot at the Union Buildings after an “exhaustive consultation process,” said Jacob Zuma, the South African president at the time.

At the Johannesburg university forum in November, researcher Temba Middelmann said there are sometimes political and commercial factors, as well as an element of “arbitrariness,” behind the erection and location of statues. He recalled Indian support for the unveiling of a Johannesburg statue of Mahatma Gandhi, which was vandalized in 2015 after a protest alleging the Indian independence leader had been racist toward Africans.

There is an argument that statues of individuals are “not the way forward in terms of monuments,” Middelmann said. “But they continue to go up.”