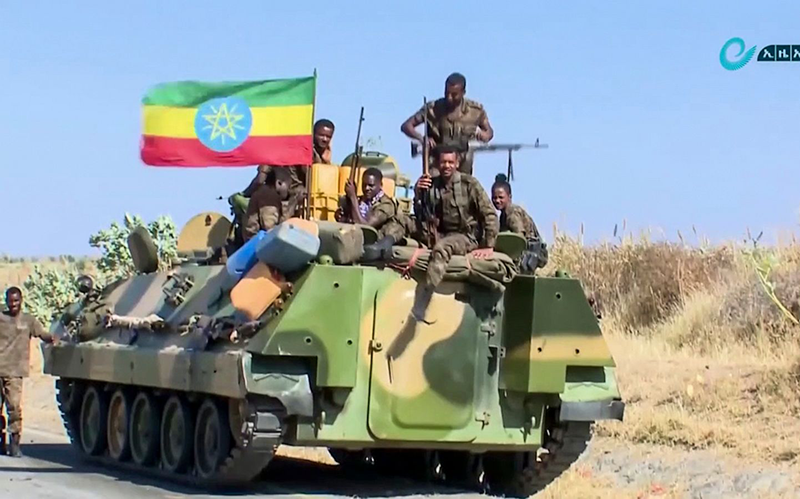 Officials in Ethiopia’s restive Tigray region allege that Ethiopian forces have again teamed up with those from neighbouring Eritrea to attack the northern area.

Ethiopia’s government did not comment Thursday after the allegations by the Tigray External Affairs Office and by Tigray forces spokesman Getachew Reda, who said a “massive” offensive had begun in northwestern Tigray.

But the government alleged in turn that Tigray forces’ own fighting had intensified.

Claims by both sides in the renewed conflict are difficult to verify since the Tigray region remains largely cut off from the world and without basic services. The conflict that began in November 2020 had calmed earlier this year but resumed last week after efforts at peace talks failed.

With both sides choosing to fight instead of talk, millions of people in Tigray remain severely deprived of food and other supplies and those in the neighbouring Amhara and Afar regions again fear for their lives.

Ethiopia’s foreign minister and the lead negotiator for the previously planned talks, Demeke Mekonnen, told diplomats in the capital, Addis Ababa, that the government is still open to peace efforts. “But we will take whatever measures are needed to secure the country’s sovereignty,” he said.

A witness in the Afar region’s capital, Semera, told The Associated Press he saw a large contingent of Ethiopian army units mobilizing on Sunday and Monday and moving north toward Eritrea, next to the Tigray region, the next day. He spoke on condition of anonymity for fear of retribution.

Eritrea’s Information Ministry, in a statement Thursday, accused the Tigray forces of starting the latest fighting.

In a rare admission, Ethiopian officials last week said federal and allied forces had retreated from the strategic Amhara region town of Kobo, south of Tigray.

On Wednesday, both Ethiopia’s government and Tigray forces announced the opening of a new front in the border area with Sudan.

A resident of the historic Lalibela town in the Amhara region told the AP he saw a “previously unseen” level of aircraft movement on Thursday, following Tigray officials’ allegation that federal forces were conducting several dozen flights to the town.

Ethiopia’s government on Thursday again warned against publicizing military movements, saying anyone who supports or assists the propaganda of the “enemy” will face up to life in prison.

On social media, many Ethiopians are expressing their support to the government in the latest fighting. But some question Prime Minister Abiy Ahmed’s administration’s handling of the war, and organizations like the Inter-Religious Council of Ethiopia are calling on both sides to give peace a chance and sit for talks.