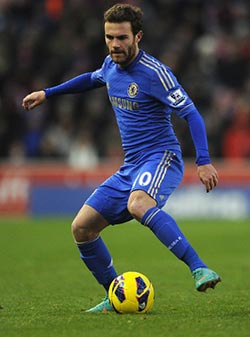 CHELSEA boss Jose Mourinho confirmed on Friday that Juan Mata will have a medical at Manchester United ahead of a move to the Premier League champions, but sources report that the deal will be kept on ice until Egyptian winger Salah has agreed personal terms, passed a medical and been granted a work permit.
That process is expected to take several days, though there are no obvious reasons why it should not go ahead, and United are expected to complete a club record deal of around £37 million for playmaker Mata, who has found first-team opportunities hard to come by since Mourinho’s return.
“It is a good offer. Respectful to us, respectful to the value of the player. That allows to try to bring another players because we need another player,” Mourinho told a news conference. “Sooner rather than later things will be finalised.
“I asked him when the offer comes are you really happy to go and he was saying yes I am really happy to go. After that we could feel mixed emotions.
“We are happy he goes to fantastic situation but we are all sad as well and some of him was a bit the same.”
“No one is jumping about because Juan is leaving. We all like him a lot and we can’t say you can only go if you go to Russia, to China, to France or Portugal.
“I don’t know if Chelsea supporters globally would be happy with that because we are an open club.”
Since joining from Valencia for £23.5 million in August 2011 Mata has twice been voted Player of the Year at Stamford Bridge but has slipped below Eden Hazard, Willian and Oscar in the midfield pecking order this season.
“It’s a good move for Juan, it’s good for the Premier League and the offer was right. We hope Juan does well. We are convinced he will do well. No fears for us.”