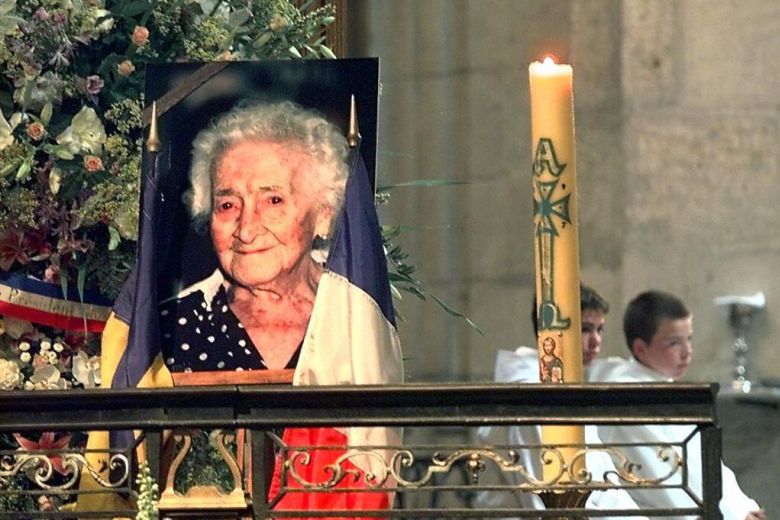 A record held by a Frenchwoman as the world’s longest living person could be fraudulent and involve an identity swap, Russian researchers have claimed in a report that has sparked widespread controversy.

Jeanne Calment died at the age of 122 years and 164 days in 1997, setting a record as the world’s most long-lived person that is still unsurpassed.

The elderly woman used to joke that God must have forgotten about her.

But Russian mathematician Nikolai Zak is not convinced by her story.

In collaboration with gerontologist Valery Novoselov, he spent months analysing biographies of Jeanne Calment as well as her interviews and photos, witness testimony and the public records of the city of Arles in southern France where she lived.

“Analysing all these materials led me to conclude that Jeanne Calment’s daughter Yvonne assumed her mother’s identity,” Zak told AFP.

Zak, a member of the Moscow Society of Naturalists at Moscow State University, recently published his report called “Jeanne Calment: the Secret of Longevity” on ResearchGate, a portal connecting scientists around the world.

While opponents have slammed the report, some scientists have welcomed it and stressed the need for closer checks into longevity records.

Zak suggests that in 1934 it was not Calment’s daughter Yvonne who died of pleurisy, as official records say, but Jeanne Calment herself. Yvonne then took on her mother’s identity in order to avoid paying inheritance tax.

The Russian researcher points to discrepancies between physical characteristics listed on Calment’s identity card from the 1930s and her appearance in later years.

The card gives her eye colour as dark and her height as 1 metre, 52 centimetres and describes her forehead as low — all details that jar with her later appearance.

“As a doctor I always had doubts about her age,” said Novoselov, who heads the gerontology section of the Moscow Society of Naturalists.

“The state of her muscle system was different from that of her contemporaries. She could sit up without any support. She had no signs of dementia.”

Calment, whose longegevity was celebrated in France, used to joke that God must have forgotten about her

After Calment’s death, scientists expressed regret that no autopsy was held to find the reasons for her exceptional longevity.

She used to talk of enjoying chocolate and port and would smoke an occasional cigarette before her health deteriorated.

Fuelling suspicions, Calment ordered some of her old photos to be burnt when she became famous, the Russian researchers say.

Interviewed by AFP, French demographer and gerontologist Jean-Marie Robine, who took part in authenticating Calment’s age for Guinness World Records, said he “never had any doubt over the authenticity of the documents” of the woman.

He slammed the Russian report, saying it “never examines the facts in favour of the authenticity of the longevity of Madame Calment” and “appears to me to be defamatory against her family.”

The mayor of Arles at the time of Calment’s death, Michel Vauzelle, said that the Russians’ theory was “completely impossible and ridiculous” since Calment was monitored by a number of doctors.

But others welcomed the research.

“The idea of assumed identity had already been considered by those validating (the claim) and I regularly invited demographers to hold onto this hypothesis,” said Nicolas Brouard, research director at France’s Institut National d’Etudes Demographiques (INED).

“It’s good that Nikolai Zak has carried out research that is independent and covers the same area of investigation. It’s a very good piece of work and an argument in favour of exhuming the bodies of Jeanne and Yvonne Calment,” he said.

DNA testing would be able to finally settle the debate, he said.

Belgian demographer Michel Poulain, of the University of Louvain, welcomed what he called “quite a detailed investigation” that he said shows the need for further scientific research “to validate the exceptional age of these supercentenarians” — those older than 110.

“The probability of an erroneous age increases exponentially with presumed age,” he said.

Zak came up with the idea of investigating Calment’s life while creating a mathematical model of the lifespan of supercentenarians.

“The more I searched, the more contradictions I found,” he said.

In a book published in 1997 titled “Insurance and its Secrets”, he found a short passage about Calment that supported the idea that her daughter took on her identity.

The book’s author, Jean-Pierre Daniel, wrote that an insurance investigator looking into a life annuity taken out by Jeanne Calment had already concluded that fraud took place.

“But at the time Jeanne Calment was already considered a national heroine. That official asked his bosses about it and they told him to keep on paying out the annuity. There was no question of creating a scandal over the doyenne of the French,” he told AFP.

Gerontologist Novoselov argues that question marks over Calment’s true age are damaging to his field since “for gerontologists, Jeanne Calment is a symbol. Her name is cited in all the studies… For research to advance, we need to show the true boundaries of the chessboard”.

Members of Calment’s extended family did not respond to requests for comment from AFP.

If Calment’s record were to be cancelled, the new record-holder would be American Sarah Knauss, who died at 119 in 1999.