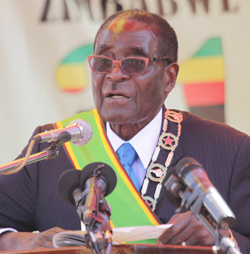 I OFTEN hear people fantasising about the good old days, when the Smith regime was still in charge of the country. That’s perfectly natural; in times of trouble one looks back at the positive aspects of yesteryear, and plays down the negative aspects. The psychologists amongst us will testify that our minds are built that way.
I’ve felt compelled though to respond to a May 1 NewZimbabwe.com article by Kariba Kay entitled “White African: What might have been”, which publicly expresses these fantasies by using emotive words like “terrorist” in 2017 to describe Zimbabwe’s children who were fighting a colonial, repressive regime.
Kariba basically argues that Zimbabwe-Rhodesia should have been allowed to stand, which would in turn would have created a flourishing economy. To Kariba Kay, all failures post-1980 are therefore solely at the feet of the current regime because White Zimbabweans were completely removed from the levers of power.
I attempt to respond to the article – not by exonerating the current Zimbabwean regime of atrocities and mismanagement – but by highlighting flaws in Kariba Kay’s arguments. I respond as a citizen of Zimbabwe (independent of any political affiliation) whose only bias is the belief that colonisation – in any guise – is unjustified. Below are some of the arguments made or insinuated by Kariba, and where I think the flaws are.
Colonisation was good because it modernised a primitive society
The argument here is that we should somehow be grateful that the British colonised our country. That argument misses the full picture. Yes, our economies were not developing at the same pace, but trade and collaboration would have yielded a much better outcome than colonisation. Through things like the Unilateral Declaration of Independence (UDI) in 1965 and the banning of black civilian opposition parties earlier that decade, Smith allowed people Kariba now calls “terrorists” like Mugabe to thrive.
The civil war brought about by wanting to refuse black majority rule “in a thousand years” killed off any hope of black moderates taking over power, and turned moderates (like Mugabe) into militants. The Muzorewa concession discussed in Kariba’s article came 20 years too late. Thousands of lives had already been lost, so black opposition leaders (who by then had spent a combined total of over 100 years in prison without trial) were not going to back down at that point. It is therefore playing fast and loose with history to just go back to 1979 and ignore even the short historical stride back to UDI in 1965.Advertisement