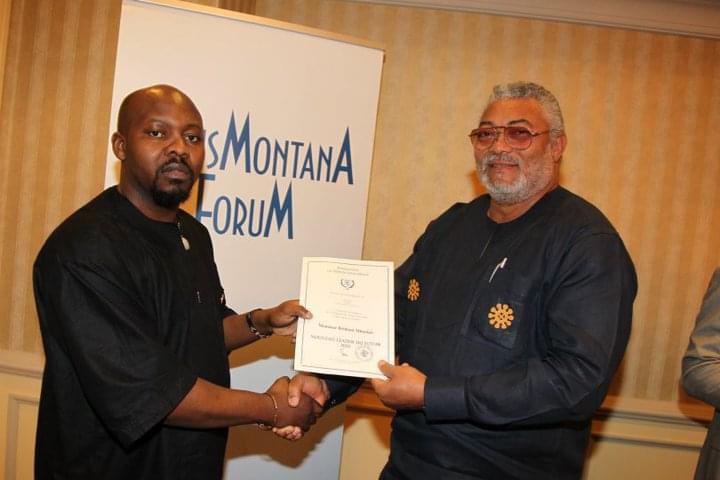 An African Giant, the Mighty Tree has fallen. ‘Junior Jesus’, as he was affectionately known, President JJ Rawlings of Ghana, 73, a true Pan African has died.

He has gone to join a legion of Africa’s Great Sons and Daughters. Africa has lost one of her Greatest of Sons.

My first very personal encounter with President Jerry John Rawlings was in 2010, in Brussels. Note, the irony of it, meeting one of Africa’s radical revolutionary leaders, a true PanAfrikanist, in Brussels, the seat of Europe’s Global Imperial Designs.

Well, as fate had it, I met him there. I remember vividly the day of it. In the early morning on a Sunday in March 2010, I was booked at Hilton Hotel. President Jerry John Rawlings was attending a Special session on Young and Emerging Global Leaders, as a Fellow, I was due to speak at that session.

President JJ Rawlings was to Chair my Presentation session.

A great man with such an aura and presence, his piercingly scrutinising eyes, coloured by a contradiction of both a ‘scaring serious’ look and quick switches to laughter toned by his course voice; a mark of his temperament, I later heard.

Upon meeting him, after a few salutations, he asked me if I had gone to Church since it was a Sunday. Not knowing how to respond, considering that I really have been a lay Catholic for quite sometime, I muttered a few little things, trying to wriggle my way out. His wife, Nana Konadu Agyeman-Rawlings, stood beside him. On realising her husband had put me in a spot, she quickly jumped in, admonished him, and said to me, ‘…youngman, you really are dressed like a true African. That shirt, I bet it’s from Ghana.’ To which I promptly affirmed and added that I had spent about 6 months in Ghana.

On hearing that, President JJ Rawlings behaved like every African leader when flattered. His curiosity raised, he wanted to know how I found Ghana, and whether I had liked it. He even told me that he knew I was an Academic and an Activist, because he had read my Bio the previous night. I also learnt that the then President of Ghana, the late Professor John Evans Fiifi Atta Mills (my other Professor whose story I am yet to tell in the fullness of time), was his protégé.

So I went through a whole litany of the things I liked about Ghana, including my witnessing of Ghana’s 50th Independence Celebrations and the removal of zeros from Ghana’s currency, the ‘Cedi.’ On the latter, I cautiously traded. I even added that I had traversed the length and breadth of Ghana, from Ashanti’s Kumasi, right across the Volta region to Sekondi. I also told him about eating Fufuo, Kenkey, Banku, Gari in Atomic, Madina, and some parts of Legon.

That was enough to endear myself to this African Giant.

I was to spend a full week with President Rawlings. In the course of that week, we covered so many topics about Africa and the world. It turned out I was in the presence of a Philosopher, an Orator and a Great Storyteller. He told me of his life, growing up in Ghana as a young Catholic, serving as an Alter Boy including his ‘dalliance’ with the idea of becoming a Priest (something he narrated with great passion), he also told me he how joined the Military, meeting his wonderful wife, living a very modest life as just a Catholic and serving in the Military, and including how he decided to get involved in Ghana’s politics at the time.

He also told me about his life as a President, and spoke so fondly of his times with Thomas Sankara, whom I could tell he still mourned. He also told me of his deep philosophical discussions with Commandante Fidel Castro. As a young Academic, in the presence of such a man who spoke with such great erudition, I couldn’t help but marvel. I later learnt from his wife, Nana, that he was such an avid reader, as she further chuckled that, ‘…this one, sometimes he goes on a philosophical tirade and I just have to pretend to be hearing what he is saying!’

But such is the feature of all revolutionaries. They have a tendency to zone into a world of their own. I also recall one incident when he abruptly asked me, ‘…youngman what are your dreams about Africa.’ With his piercing eyes, he curiously waited for my response.

Each time he asked such a question, after my response, he followed up with a very deep conversation, of course, him leading the conversation in the style of a ‘lectorial.’ Before we parted, he asked another very surprising question, ‘…youngman, are you a Zimbabwean or Matebele. How do you describe yourself.’ With great confidence, I promptly told him that I am Ndebele (Matebele), and proudly so. I added that I have never been a Zimbabwean and that the Zimbabwean identity was and has always been forced on me, now that I am liberated, I can proudly proclaim to the world that I am Mthwakazi.

So he enquired, how then do young people from Matebeleland envisage bringing about the full attainment and realisation of their State. Before responding to his question, I quickly shot back, asking him if he would be willing to support our cause, to which he chuckled, ‘…maybe.’ That was his response.

So I then went on to ‘carefully’ detail what we envisioned and how we thought we could do it given that the AU had declared that guns should be totally silenced by 2020. He burst into laughter, then turned and looked at me and said, ‘…youngman, if I had your mindset I would not have radically changed Ghana with an AK47.’
I bid him farewell. Him and his wife invited me to Ghana.

Such a great moment, I had spent with one of Africa’s luminaries.

But who is/was Jerry John Rawlings?

Jerry John Rawlings, a devout Catholic (he even wanted to be a Priest), was a son of a Scottish farmer and a Ghanaian mother. He entered the Ghana Air Force, graduating in 1969. Then a decade later, he emerged as a senior officer in the Air Force and overthrew a military government.

He then voluntarily handed over power to a civilian leader.

During his stint in government he oversaw the execution of several government leaders, ministers and army generals for corruption, but expressed some regret about the killings.

MOST NOTABLY, something that most people would wish to relate to Zimbabwe’s current situation, JJ Rawlings executed by firing squad Supreme Court judges.

Unfortunately, that left a stain on his legacy, although there is divided opinion on this.

Following these executions, he remarked, ‘…I am still aware that we in Ghana do not like bloodshed.’

“I personally do not like it. I mean, I’d rather, let’s say, confiscate a man’s wealth and bring him down to the level to which he’s brought us just to give him a taste of what life has been, what he’s done to us”, he added.

In his second coup, he stayed as head of the military government until introducing Multi-Party Democracy in 1992, which elections he resoundingly won and became Ghana’s Democratically elected president.

During the first phase of his government most of his policies were committed towards Socialism, but later introduced free-market reforms (cf. Mhlanga, 2015 on this)

Jerry Rawlings is credited for ushering in a long period of political stability, that continues in Ghana to this day, following a very long tumultuous series of coups from the 1960s to the late 1970s.

JJ Rawlings is also credited for championing the cause for a Debt Free Africa. He spent much of his time campaigning for African countries to have their international debts with the IMF and World Bank written off, and was later appointed by the African Union as their envoy to Somalia in 2010.

During my stay in Ghana and following my short stay with him, I learnt that President JJ Rawlings genuinely loved Ghana. He genuinely loved his people. I was even shocked to learn that he spent quite sometime distanced from his children because he didn’t want his detractors to attack him through his children.

As a result he dedicated much of his life to the service of Ghana and the Ghanaians. His legacy, while notably controversial, as is the nature with most revolutionary avant-garde will forever be celebrated.

His name has been engraved in the tablet of time. Never to be removed by any mortal being.

To that I say, Viva Commander, Viva Son of the Soil….Forward to the Bright Future of Africa! You ran your race, the mantle of the struggle has now been firmly placed in our hands as young people. With a strong promise, we shall finish what you started JJ Rawlings, Rest in Peace and Rest Easy Giant of Africa!

Dr Brilliant Sigabade Mhlanga is an Academic, an Activist and an Archbishop Desmond Tutu Fellow, and a W.K. Kellogg Foundation Fellow for Southern Africa. As an internationally acclaimed Scholar, he has won numerous Academic Awards, and was recently invited by the Queen of England to Buckingham Palace and is a Professor of Media & Political Studies. He is also a Human Rights Activist.