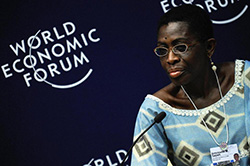 THE government needs to restore confidence in the country as its economy will only grow by a meagre 3.2 percent next year, the International Monetary Fund said Thursday.
“With regard to Zimbabwe, economic conditions remain difficult,” IMF director for Africa Antoinette Sayeh told a news conference.
Zimbabwe will thus lag behind the sub-Saharan Africa region, which is forecast to expand by an average of five percent this year and 5.75 percent next year according to the IMF.
The government had projected a 6.4 percent growth this year but revised the figure downwards to 3.1 percent, citing depressed mineral output.
Sayeh said she “highlighted four issues that are key to helping fast-track the country’s policy reform agenda” during her meetings with Zimbabwean officials
These included “restoring confidence and stability in Zimbabwe’s financial sector … and enhancing the business environment with a view to attracting investments” as well as balancing spending in order to begin addressing the country’s debt challenge.
Zimbabwe’s economy has been in a tailspin for more than a decade, only able to manage slow growth at best that has done little to reduce high unemployment.
The country owes domestic and foreign creditors $9 billion, and a controversial law limiting foreign ownership enacted by President Robert Mugabe in 2007 has spooked international investors.
Mugabe has argued that the law forcing foreigners to hand over majority stakes in companies empowers black Zimbabweans.
But critics complain that the law and the frequent amendments to it have been a key factor in hobbling the country’s once vibrant economy.Advertisement