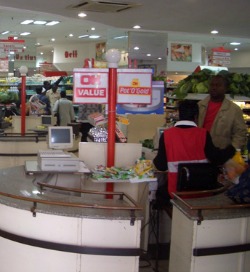 HARARE: Zimbabwe’s largest retailer, OK Zimbabwe last week said its internal tracking of inflation showed that inflation stood at 7,69 percent in September, much higher than the 0,78 percent given out by the Zimbabwe Statistics Agency (Zimstats), laying bare the difference between official figures and the situation on the ground.
OK Zimbabwe calculates its inflation based on the changes in prices of its product range. Its financial results are also reflective of the influence of high inflation. This explains why three main retailers are posting impressive performances relative to regional peers.
Three main retailers dominate the Zimbabwean market: OK Zimbabwe, TM Supermarkets and Choppies all of whom are delivering good value to their shareholders despite a sluggish economy characterised by acute forex challenges and waning aggregate demand among other challenges.
The performance, as OK Zimbabwe said, is attributed to the inflationary environment coupled with the use of electronic means of payment as the economy moves to plastic money to counter the prevailing serious cash shortages.
Zim retailers perfomance at glance.
The largest retail group OK Zimbabwe’s net income more than doubled to $5,1 million in the six months to September, from $2,3 million in the comparable period last year on increased revenue and inflationary pricing.
Revenue rose 22,6 percent to $268 million from $218 ,6 million in the same period last year.
Another retailer with operations in Zimbabwe, Choppies which is listed in Botswana, also said revenue at its Zimbabwe operations grew by 17 percent in full year ended June despite a sluggish economy underlined by chronic shortages of cash.
The growth in revenue was despite a three percent decline in sales over the period, explaining the ‘ inflation factor’ which is driving retailers performance in Zimbabwe.
Choppies has 32 outlets in Zimbabwe,it operates in South Africa, Kenya, Tanzania and Zambia.
South African retailer Pick n Pay also echoes the same sentiments on its Zimbabwe operations stressing that its Zimbabwe associate Pick n Pay TM Supermarkets boosted the group’s half year revenue.
Pick n Pay’s Rest of Africa division increased by 12,6 percent to R2,3 billion ($170 million) while profit before tax was up 22,3 percent from R103,7 million ($7,7 million) to R126,8 million ($9,5 million), due to a strong performance from TM Supermarkets.Advertisement

The group’s share of TM’s earnings grew 40,4 percent on last year to R40 million ($3 million). TM Supermarkets has 56 stores in Zimbabwe, 16 of which trade under the Pick n Pay banner. Pick n Pay controls 49 percent of TM , with the remainder held by Meikles.
Pick n Pay explicitly said that even though its franchise businesses outside South Africa did well in the period, the group’s share of profits of TM Supermarkets (its associate in Zimbabwe), continue to make an outstanding positive growth contribution.
Zimbabwe supermarkets operate in a market which is still signiﬁcantly underpenetrated in terms of formal retail but face competition from an explosion in informal commerce. Supermarkets however have an edge over the informal which are predominantly cash based.
The cash situation in the country has seen an upsurge in customers bracing to que in formal shops which offer an array of payment options other than cash.
However retailers are not immune to the forex challenges facing the economy at large, which constrain their capacity to meet foreign suppliers on time, posing product supply challenges.
They however leverage on the support from their parent companies, though not sufficient, to meet consumer demand and provide a wide range of products.
The performances of these supermarkets indicate that despite the sluggish outlook, Zimbabwe is a high performing economy which could get even better with the right policies.