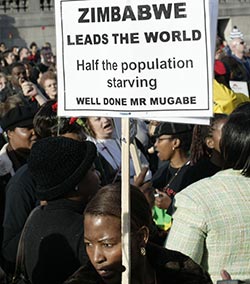 DURING the period in the run to the elections until recently, there were projections that if Zanu PF took over power and recaptured the state, the steep decline across all social indicators would plunge the country into a totally failed state category and compel the ruling party to follow the path of democratic reforms. Currently, with an opposition that is in complete disarray and a people who have been thoroughly beaten into docility, it might be the time to re-think our approach to the crisis.
We are faced with a situation of unparalled magnitude, because some of the democracy evangelists are also joining the chorus, ‘international re-engagement is the new game in town’ with the full support of some of our international friends whose foreign policies explicitly underlie the importance of human rights and democracy promotion in their foreign relations. One wonders what has changed in the country for us to be very enthusiastic about re-engagement that is based on flimsy grounds other than the evidence-based ‘action for action’ principle. The current chorus goes against conventional psychology that behaviour that is encouraged will thrive.
Despite several explicit articles in the European Treaty, in particular Article 21 and several articles in the Cotonou agreement and the EU various human rights instruments, Europe has been backpedalling on its commitments and has begun to whisper when it comes to Zimbabwe. The lack of courage to stand on principles and hide behind vague pragmatic considerations cannot be supported by evidence and neither can it survive legal scrutiny. It is a lack of courage that will simply embolden and encourage human rights violators while depressing those who truly believed that our friends would stand with us when it really matters.
If the current trend continues, Zimbabwe will find its permanent position in the back burner of international policy discourse, with a totally forgotten civil society, which will make it another Cameroon. In re-thinking the future, we need to recall our solid achievements of yesterday that laid the foundations for where we are but we should never overestimate what such achievements can do to help solve the current challenges. There is need to re-think what civil society means and in so doing expand its definition to fully include those who have strove for a better Zimbabwe from the margins of the struggle, but who might have the solutions hidden in their deep seated aspirations.Advertisement