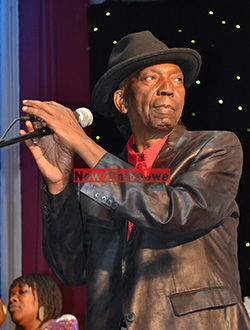 THEY came in droves from all over the UK and packed Birmingham’s Piccadilly Banqueting Suite Saturday night for him, refusing to be put off by the clearly extortionist £30 demanded by the organisers for a ticket at the venue.
And Zimbabweans being diligent extorters, the racket didn’t end there. Inside the venue, a can of the legal intoxicants was going for £4 each; stuff the sellers had bought for well less than half that amount at the corner shops.
And they were clever; the venue was strategically chosen for being away from any options. You wanted a drink, you had to buy theirs. Brilliant!
Mukanya turned up nearer 2300 hours, looking slightly dazed, perhaps feeling the full weight of his 70 years, or having had a little too much of that other stuff.
He was surrounded by a posse of eager handlers who stopped anyone daring to get close to him, lay a hand or say howdy.
Security was provided no-nonsense locals who, sadly, had no sense of the essence of the man and refused us the opportunity to, in the words of the First Lady, ‘take photo’.
Mukanya was likely oblivious of the irony of a ‘man of the people’ – being barricaded away from the people; much like one Robert Mugabe; the fellow he despises for ruining his beloved Zimbabwe.
We later returned from a 30 minute walk-about looking for cheaper booze; itself a hopeless employ; the neighbourhood is Asian and so we wen’t going to be lucky.
Mukanya was then on stage, leaning on some object – perhaps a speaker – and the Chimurenga beat was in full boom; the place was a delirious cauldron.
Shrieking ladies, whities among the lot, had ditched their partners at the back of the hall to mass at the front.
There, they waltzed and gawped at a bow-backed 70-year-old man, one barely able to stand on his feet. Oh, the lucky fella!
An unmarried chap who came to the show in hope looked positively jealous; he could have done with some of the attention.
Mukanya would sing just a few lines; but most of the time he sauntered about the stage, stroking his dreadlocks, and often cheekily grinning at the mass of adoration before him.
The energy is gone, the man is 70. Rather than sing too much, he let the Chimurenga beat do the talking; reconnect with the fans who so idolize him. And, boy were they delighted!Advertisement

He was smart enough to know that this crowd had not trooped here and in such numbers for DangerZone because that stuff – and of course the clue is in the title – is indeed a danger zone.
Instead, he unleashed the old favourites; one after the other and we were taken back to those good old days when Zimbabwe felt like it could yet be the promised ‘land of milk and honey’.
Somehow, in that confusion, I bumped into two of his daughters.
What do you make of this? I asked.
“Impressive,” the younger of the two ladies said, smiling.
“It could have been even bigger though. But the organisers penny-pinching organisers would not do more on the promotion side,” she added.
Perhaps, but business is also about limiting costs to the barest minimum and then bumping the returns.
I hope Mukanya makes the effort, indeed the sacrifice if that is what it takes, to perform for those of his fans still in Zimbabwe; they deserve it.
But he may be right to take the view that (and before some needlessly ferment, this is a joke!) in a country where a 91-year-old screams assassination attempt, 70 may not be seen as too old to – eh, host in our pristine remand facilities!
MORE PICTURES: