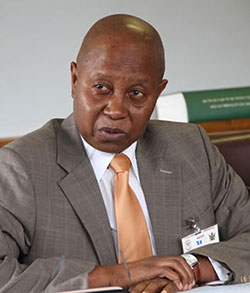 ZIMBABWE’s tax agency says most revenue heads are underperforming, with collections for the year to date falling 14 percent short of the $542 million target.
Last year, net collections amounted to $3, 6 billion against a target of $3, 82 billion. For 2015, the tax collector has since set a revenue target of $3, 7 billion in line with the subdued economic activity in the country.
Zimbabwe Revenue Authority (ZIMRA) commissioner-general Gershem Pasi on Friday told journalists in the capital that revenue collections were declining despite a tax amnesty put in place last year, to encourage compliance.
He said taxpayers were not taking advantage of the opportunity to regularize their tax obligations.
“We expected people to come in numbers but that has not been the case. People are not forthcoming. The amnesty is coming to an end on the 31st of March but so far we have only received 1,471 applicants,” he said.
The amnesty covers offences committed during the period from February 2009 when the country adopted the multicurrency regime to September, 2014.
Pasi said the 15 percent tax charged on foreign tourists would remain, despite protestations that it could slow the growth of the sector.
“The 15 percent VAT should not be taken as an ambush as there were negotiations between government and the industry,” said Pasi.
“They (tourism industry) should be looking at the cost structures other than blaming a legitimate tax which should be allowing revenue to flow to government.”
Foreign tourists’ payments for accommodation and tourism-related services were exempted when the government introduced VAT in 2003, as part of efforts to promote the sector’s growth.
Finance Minister Patrick Chinamasa last year proposed to remove the exemption in a bid to shore up dwindling government revenues, although he did not formalise the proposal when he presented the 2015 national budget last November.Advertisement