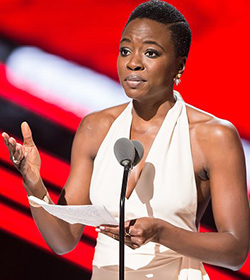 WHEN the 2018 Women’s Voices Theater Festival comes to a close and the hits to emerge from it are tallied, Danai Gurira’s comedy Familiar will surely be on the shortlist.
Gurira’s play Eclipsed—a brutal story about a Liberian rebel war lord’s sex slaves and a female Liberian freedom fighter’s attempt to rescue them—had a hugely successful run on Broadway, where it has to have been the most politically gripping play about African women ever seen on the Great White Way.
With Familiar, Gurira continues her focus on women of African ancestry, but this time the politically gripping story she tells is tucked inside – wait for it – a gut-bustingly funny comedy set in a suburb of Minneapolis.
The storytelling starts with Set Designer Paige Hathaway’s eye-filling two-level interior of a middle-upper-class home, tastefully decorated in white and beige. It’s like a whitewashed canvas awaiting bold strokes of coloUr (which the play more than delivers).
The home belongs to a sixty-something married couple – he’s a lawyer, she’s a biochemist – who are emigres from Zimbabwe, but there is not a hint of Africa in the decor. There are however icicles hanging from the exposed roof and frost on the windowpanes, as it’s sub-zero Minnesota winter. The look is coolly assimilationist, Architectural Digest style.
Western values and African traditions
Oh, but there’s a carved antique Christian cross on the wall. And Donald, the husband, attempts to hang a map of Zimbabwe, but his wife, Marvelous, wants it taken down. The conflict that’s to heat up between Western values and African traditions has only just begun—and already laughter is rolling sitcom style.
Donald and Marvelous’s younger daughter, Nyasha, has flown in from New York, where she’s been trying to make it as a singer-songwriter and feng shui consultant. To try to better understand her Zimbabwean roots, she recently visited Zim, as she calls it; but having been raised by parents who completely Americanized her, she did not know the language and could not connect.
The occasion is the wedding of Donald and Marvelous’s older daughter, a successful lawyer named Tendi to Chris, who co-founded a nonprofit that does human-rights work in Africa. They met cute in a charismatic Christian congregation.Advertisement

As it happens, Chris is Caucasian (“a white boy from Minnetonka”), and the play mines their cross-cultural contrast for much enjoyable humoUr. Interestingly, the values and culture clash that really erupts in the play is not so much about the wedding couple as it is about bitter differences and animosities among Marvelous and her two sisters.
Disagreement over roora