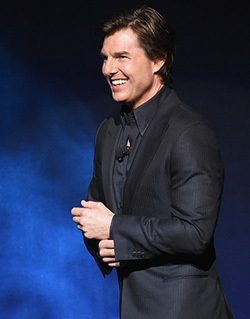 THERE’S some interesting talk in the cleverly satisfying script of “Mission: Impossible — Rogue Nation” about the element of luck. As in: How much is luck a factor in the success of Ethan Hunt and his IMF cohorts? After all, in the last movie they merely saved us from a nuclear holocaust. Was it talent, work, or dumb luck?
Whatever you decide about that, let’s be clear about this: When it comes to Tom Cruise and his durability as an action hero, luck has little to do with it. The guy’s an action star extraordinaire, and it’s not luck or chance but work and smarts and yes, some swashbuckling derring-do that get him there.
Whatever you may think of Cruise and his complex off-screen persona, let’s give him this: At age 53, he and his Ethan Hunt are, if anything, getting more fun to watch. And they make “Rogue Nation” not merely a serviceable summer flick, but an entertainment well worth your inflated ticket price.
Let’s give kudos to a few other folks, too, starting with director-writer Christopher McQuarrie, who, like each director in the franchise, puts his own stamp on the proceedings.
McQuarrie (“The Usual Suspects”) does this with both a wry script that often makes fun of what’s happening, and some seriously entertaining action pieces, including a complicated assassination sequence set in Vienna’s glittering opera house during a lavish production of Puccini’s “Turandot.” (Parents: here’s a chance to get some opera into your kids’ summer — sort of like hiding the broccoli in the brownie mix.)
Also invaluable is returning “MI” vet Simon Pegg as Benji, the wise-cracking (and safe-cracking) computer whiz who provides a crucial dose not only of humour but also of humanity here.
Welcome newcomers include Alec Baldwin, as a pompous CIA boss with deliciously dry delivery, and Rebecca Ferguson, making the most and then some of the obligatory female role. Ferguson is — get this — Swedish-born, named Ilsa here, and, yes, shows up in Casablanca, too.
“Rogue Nation” doesn’t start slowly. In fact, it begins with the scene you’re most likely to have heard about, because it involves Cruise’s own stunt work, in which the actor actually places himself on the wing of an airborne jet, and then — why not? — lets his legs slip, hanging on by only his hands as the landscape beneath gets tinier and tinier.Advertisement

Why is Hunt on the wing? Well, that’s what can happen, annoyingly, when you try to board a plane AFTER take-off. He manages to successfully remove a case of nerve gas canisters, but we’re just getting started.
We soon learn that the IMF is being disbanded, and the timing is terrible. Hunt is onto something really bad: the Syndicate, a nefarious group of former spies led by a vague, sinister leader (Sean Harris). That the Syndicate is not attached to one particular nation — it is the “Rogue Nation” of the title — has eerie resonance in today’s world.
Hunt soon finds himself chained to a ceiling in a London dungeon. Enter Ilsa (Ferguson) who obviously has some attraction to Hunt, and a tendency to save his life, but also is clearly not working with him, either.
The two meet again in Vienna, and eventually in Morocco, where Hunt and his friends take on a mission that involves, for one thing, Hunt holding his breath underwater for an impossibly long time while fighting an impossibly strong water current and many other things.
It shouldn’t surprise you by now to hear that Cruise apparently flirted with on-set danger here, too. And it’s impossible to deny that this knowledge adds to the fun.
Early on, when Hunt was hanging off that plane, my 12-year-old companion — who’s grown up in the age of computer-generated wizardry — confidently whispered: “Ha, that’s totally a green screen.” And I was happy to be able to whisper back:
“Nope. That’s just Tom Cruise.”
“Mission: Impossible — Rogue Nation,” a Paramount release, is rated PG-13 by the Motion Picture Association of America for “sequences of intense action and violence.” Running time: 131 minutes. Three stars out of four.