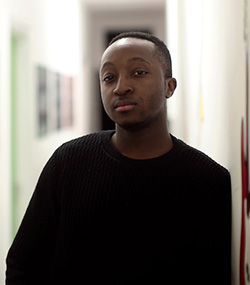 ON a pre-payday Monday evening in January you would not often expect to see a live music venue full to the brim, but the second Rationale began his set at The Fleece last night it was clear to see why the gig was sold out
Rationale – whose real name is Tinashé Fazakerley – is tipped to blow up this year and he is already getting regular airtime on Radio 1 and has received praise from huge artists such as Pharrell Williams, Justin Timberlake and Elton John.
Rationale is sure to have widened his fan base following his recent stint as Bastille’s support act during the indie-pop group’s arena tour and even in the more intimate setting of The Fleece it was easy to see how his voice could command the attention of an arena-sized audience.
Rationale is a Zimbabwe-born British singer-songwriter and his set at The Fleece – which is in Bristol’s St Thomas Street – flowed seamlessly from one great song to the next.
His singles Fuel To The Fire, Fast Lane, Vessels and Reciprocate were the clear big hits of the evening, but even when he played new songs the audience were quick to lap up his clever lyrics and energetic performance.
His music is soulful with an electronic twist and Rationale’s performance style was captivating; he bounced from an energetic song (with some smile-inducing dance moves) to tracks which were clearly filled with emotion.
In one of Rationale’s recent Instagram posts he captioned a photograph of him performing as ‘joy personified’ and that joy is infectious; Rationale, his band and the audience all looked like they were having the time of their life.
Advertisement