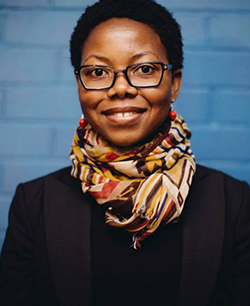 “We Need New Names” is the breakout novel by NoViolet Bulawayo that was published in 2013, and was a finalist for the Man Booker Prize the following year.
You might also recognize it as this year’s Common Reading book.
Bulawayo draws on her Zimbabwean roots to create the story of Darling, a ten-year-old girl living in a poor community called Paradise during a politically tumultuous time in Zimbabwe.
Darling navigates growing up in a community where resources, information and supervision are scarce.
As an adolescent, Darling immigrates to the United States. There, she faces the challenges of integrating into a new community, particularly one that fails to meet her expectations.
What did you think of the book?
HANNAH SOLTIS (HS) & BREANNA WIERSMA (BW) – Copy Editors
HS: In general, I thought the book made many thought-provoking points. One aspect of the book I thought the author did well was the way in which she addressed some common misunderstandings about African nations and the people who live in them.
I have found, for instance, that many people in the U.S. perceive Africa as a singular country where everyone lives in the bush because they have no money for food or education. Although the residents of Paradise do live in poverty, they have other characteristics and motivations that make them complex humans and not just Those People Far Away Who Need Help.
The book also highlighted the fact that people in the U.S. don’t generally learn about the intricacies of history or politics in non-Western countries. While I was reading, I realized that I had no idea about the historical context of the unrest in Zimbabwe, even though all of the events happened recently.
It can be easy to forget that people are multifaceted, and Bulawayo reminds us through her story that we oftentimes dehumanize those we pity.
BW: Overall, I’m left a little mixed about the book. One of the strongest points in its favor for me is that it is deeply successful as a coming-of-age novel.
Darling matures in a way that feels organic: she grows emotionally as she gains context for conflicts she faced as a child, but her voice is never lost.
That being said, it was hard for me at times to see Bulawayo’s intention. The book has a few moments that don’t seem to work for me as standalone scenes or to ask larger questions.Advertisement

These moments of disconnection leave me unsure about the book as a whole. The places where Bulawayo connects, she does extremely well, but there are places where I was left spectacularly lost.
How do you feel about it as a Common Reading pick?
HS: I can definitely see why this book was chosen for Common Reading. It fits with PLU’s goal of opening dialogues about difficult topics so as to work toward changing destructive behaviors and systems.
However, the book was very political and might have felt exclusionary to some people, especially first-years who entered into the story with little to no context.
While I believe that the novel raises important questions, it seems to assume that everyone will be on the same page about these topics, which is certainly not the case.
I enjoyed reading the book, but I can also see how it might have been an uncomfortable read for some people.
BW: Especially in light of the current on-campus conversations about culture and race, I understand how “We Need New Names” would be chosen as a Common Reading book.
I’m not sure it works for me though. I found it to be a difficult book to “get into” in general. Within the first two chapters, some heavy topics are covered (sexual assault, exorcism and suicide). These could be dissuading for any reader, but I can see how they could be particularly rough as an introduction to college reading, especially when read over the summer without classroom spaces to help discuss, dissect and contextualize them.
Ultimately, I think that “We Need New Names” is reasonable on its own merit, but as a Common Reading book, it doesn’t add up for me.
This article is taken from Mast Media.