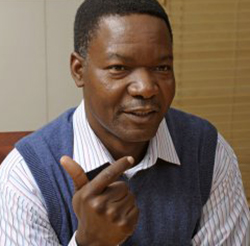 CHAMBER of Mines president, Alex Mhembere last week called on government to review its levies, saying they were destroying the gold sector, a significant foreign currency earner.
Gold miners pay royalties of seven percent, although the 2014 national budget lowered the rate to three percent on small-scale producers whose output does not exceed 500 gramms per month at the start of the year.
“Govt must not kill the goose that lays the golden egg through excessive direct and indirect fees,” Mhembere said.
Under pressure from distressed miners, the government revised its mine licence fee regime in March, but industry players and analysts said the move did not go far enough after the shock of fees that went up by as much as 5,000 percent in 2012.
He said the mining sector was showing signs of decline, registering a growth of only 6.5 percent in 2013 and was expected to slow down further in 2014.
Miners were experiencing severe viability challenges on the back of depressed metal prices and high operating costs, registering a 31 percent decrease in price from beginning of the year.
“Without interventions, this sector is certainly heading southwards,” Mhembere said.
“Most of the gold producers have been struggling to meet their operating costs, characterised by suboptimal electricity tariffs coupled with high labour costs, capital shortages and high tax charges.”
Mhembere, who is also the chief executive of the country’s biggest mining firm Zimplats, said monthly gold production was on a “free fall”, with monthly production falling from 1,230kg in 2012 to 1,058kg.
He said since the beneficiation and value addition symposium in February this year, progress had been made in a number of areas.
“The platinum producers will be establishing beneficiation facilities from July this year and have already committed $100 million towards this project,” he said.
Murowa Diamonds, 78 percent owned by Rio Tinto with the global giant’s local spin-off RioZim holding the remaining 22 percent equity, was also beneficiating the gems it produces to acid clean stage, Mhembere added.
There were new entrants in the chrome mining sector, such as AfroChine, which set up smelting facilities in Selous.
Moves by NewZim Steel owners, Essar Africa Holdings to resuscitate the giant steelmaker would also create a lot of traction in the mining industry, he said.Advertisement