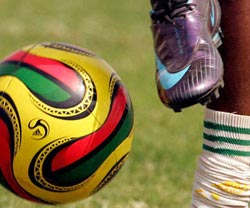 VETERAN Black Rhinos forward Philip Marufu is confident that his side will not be relegated from the Castle Lager Premier Soccer League.
Rhinos are at the relegation cut-off point with 37 points and just one point behind Black Mambas, Buffaloes and Hwange who all share 38 points each.
Ninth-placed Triangle are not safe from the chop either as they have 39 points while Shabanie Mine also face demotion at eighth spot with 40.
As the survival battle has reached boiling point just like the title race with one game left, the lowly-placed teams are fighting to avoid joining the already relegated trio of Motor Action, Tripple B and Monomotapa.
Marufu believes they will not be a casualty amongst the other five teams fighting for dear life and vowed to use his personal experience in saving the army side.
“We cannot be counted as failures among all those teams fighting relegation. Of course experience counts at this stage and I will try to do my best as one of the senior players at the club. This will also be made possible with the support of other guys. We will survive relegation,” Marufu said.
Marufu is most remembered during his Dynamos days when his brace in Abijan sank Ivorian giants Asec Mimosas in a Caf Champions League match in 2008.
What could made Rhinos’ survival task look easy is the fact that they face relegated Monomotapa in their last game of the season.