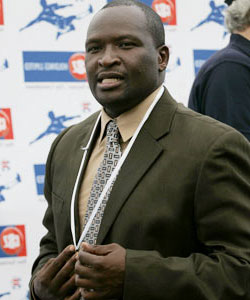 BLACK Rhinos coach Joestein Mathuthu is confident his charges will floor FC Platinum when they clash in the semi-finals of the Chibuku Super Cup scheduled for Rufaro on Saturday.
According to the fixtures released by PSL on Tuesday, Highlanders will also make the trip to Harare for a date against Harare City in the other semi-final clash at Rufaro on Sunday.
Mathuthu, whose charges walloped Triangle 4-0 in the quarter finals believes he can overcome FC Platinum to reach the final of the $500k cup.
He however, conceded it would not be easy to face the Platinum miners.
“They are a very strong side and it will not be easy. But being a cup game anything as possible. We are just going into the match hoping to proceed to the final.
“It will be nice if we end the season with some silverware,” said Mathuthu whose team is struggling in the murky waters of relegation.
Black Rhinos are in third place from the bottom with 27 points with only five matches left in the campaign.
They however need to win at least three of their remaining matches to survive although that will largely depend on result from other teams that are facing relegation.
Mathuthu however, said should they overcome FC Platinum- it would give them the much needed confidence ahead of the remainder of the campaign.
But then again Norman Mapeza aware that the championship is out of his reach will be eager to bag the Chibuku Super Cup.
Mapeza led his FC Platinum to a 1-0 defeat of Harare giants in the quarter finals of the Chibuku Super Cup courtesy of an own goal by defender George Nyirenda.
FC Platinum are in sixth place with 38 points from 25 matches and are pushing for a top four finish which will guarantee them participation in the Mbada Diamonds Cup.