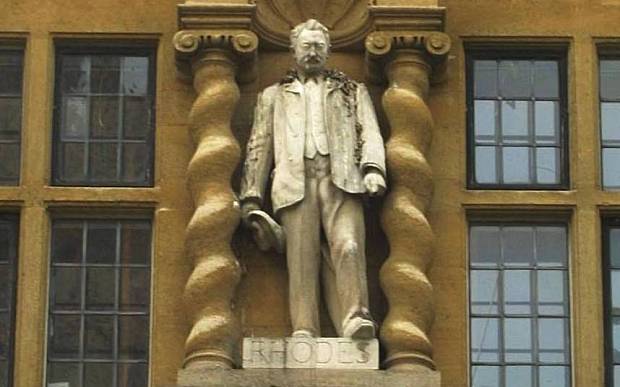 THE governing board of Oxford University’s Oriel College has voted to remove a controversial statue of 19th-century imperialist Cecil Rhodes.

Leaders at the college Wednesday announced an Independent Commission Inquiry into the “key issues surrounding” the monument, which has been the subject of recent Black Lives Matter protests.

A statement from the college on Wednesday read: “[The board] also expressed their wish to remove the statue of Cecil Rhodes and the King Edward Street plaque.

“Both of these decisions were reached after a thoughtful period of debate and reflection and with the full awareness of the impact these decisions are likely to have in Britain and around the world.”

It comes after years of debate over whether to remove the controversial statue, while the campaign group Rhodes Must Fall have led protests for it to be taken down.

On June 9, thousands of protesters gathered outside Oriel College, demanding the removal of a statue of the imperialist.

The demonstration was organised by the Rhodes Must Fall as one of several anti-racism demonstrations across the UK sparked by the death of George Floyd in US police custody on May 25.

Carole Souter, the current master of St Cross College and former chief executive of the National Lottery Heritage Fund, will chair an independent commission into the issue.

The college also said: “The commission will deal with the issue issue of the Rhodes legacy and how to improve access and attendance of BAME undergraduate, graduate students and faculty, together with a review of how the college’s 21st Century commitment to diversity can sit more easily with its past.”

“The commission is intending to draw upon the greatest possible breadth and depth of experience, opinion and background,” the statement said.

The inquiry will also invite submissions from a “broad rand of stakeholders from Oxford itself and the county as a whole,” it said.

Both written and oral evidence will be requested from alumni, citizens of the city, Oxford City council, representatives of Rhodes Must Fall and the students.

Some oral evidence will be heard during public sessions with similar rules of engagement to that of a parliamentary select committee.

“The Governing Body believes that this decision will allow a serious, appropriate and productive resolution of a complex series of issues,” the statement read.

“Ms Souter has insisted on a thorough process – but conducted at pace – and set to report to the Governing Body by the end of the year.”