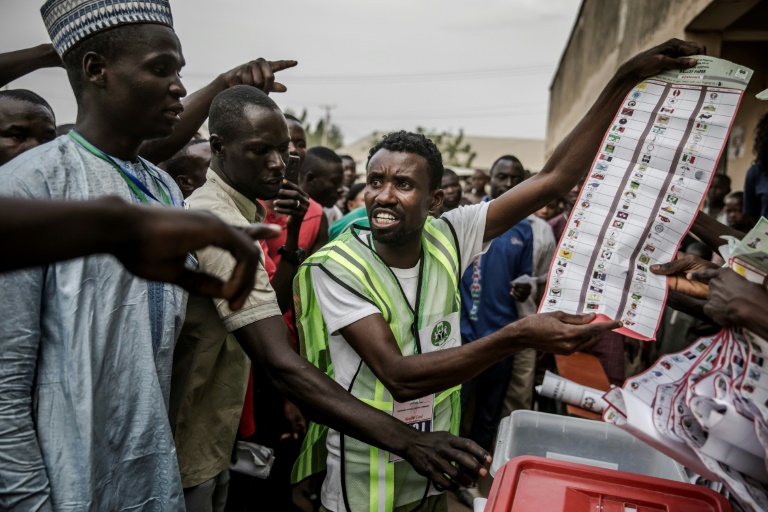 Nigeria’s main opposition on Monday accused the ruling party of trying to rig presidential elections as the incumbent cemented a lead, but monitors voiced concern about polling day problems and violence that caused dozens of deaths.

The Peoples Democratic Party (PDP) accused the All Progressives Congress (APC) of President Muhammadu Buhari of colluding with the electoral commission in an attempt to “manipulate the results”.

PDP chairman Uche Secondus told reporters the APC was using security agencies and ministers to put pressure on the authorities. “It’s as if we are in the military era,” he added.

The accusation, rejected by the APC as a “childish” attempt to discredit the commission and the process, came as Buhari — a former military ruler — took an early lead when first results were announced.

With 12 states declared and counting adjourned until 0900 GMT Tuesday, Buhari was ahead by seven states to five, with 2,976,721 votes to 2,690,616 for former vice-president Atiku Abubakar, of the PDP.

To win, a candidate needs a majority of votes and at least 25 percent of support in two-thirds of Nigeria’s 36 states and the Federal Capital Territory of Abuja.

A total of 72.7 million people were eligible to vote in the presidential poll as well as parliamentary elections held at the same time.

The election — the sixth in the 20 years since Nigeria returned to democracy after decades of military rule took place on Saturday, a week after a last-gasp postponement.

The Independent National Electoral Commission (INEC) blamed logistical difficulties, which were not entirely ironed out by the weekend, forcing voting to go into a second day.

The European Union said there were “serious operational shortcomings”, which saw polling units open late, leaving voters waiting for hours with no idea when voting would start.

The Situation Room umbrella group of over 70 civil society organisations observing the vote called for an inquiry into what it said was INEC’s “poor management” of the process.

It highlighted lapses in logistics, technology and security and said INEC had “not managed the election efficiently and significant shortcomings have been recorded”.

“The election has been a step back from the 2015 General Election and actions should be taken to identify what has gone wrong and what can be corrected,” it added.

The head of the African Union observer mission, Ethiopia’s former prime minister Hailemariam Desalegn, also said they were concerned “by the pattern of consistent postponement”.