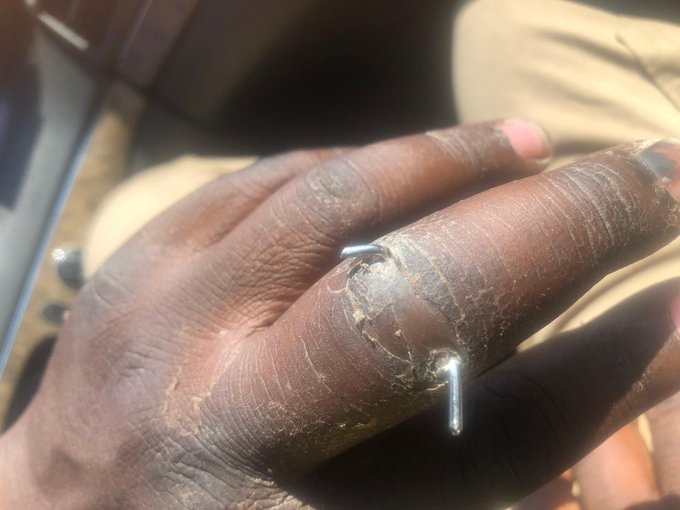 DURING a fulsome interview that President Emmerson Mnangagwa of Zimbabwe granted to state media on the eve of the country’s 41st Independence anniversary in April, he took breaks to regain his composure after getting emotional when the interview touched a raw nerve: the brutal torture he was subjected to by the Rhodesian colonial settler regime in the 1960s when he was a young freedom fighter.

Tatenda Mombeyarara also gets emotional when he talks about the brutal torture he went through.

The irony of the two men’s harrowing experiences is that Mombeyarara, a human rights defender seeking to ensure that the ideals for which Mnangagwa was tortured for are realised, was tortured by Mnangagwa’s regime for doing exactly that.

TORTURE ON THE RISE IN ZIMBABWE

While Mnangagwa gets emotional when he is reminded of the torture and inhuman and degrading treatment that he went through when he and his colleagues fought for the political independence of Rhodesia (now Zimbabwe), these emotions have not translated into concrete steps to ensure that current and future generations of Zimbabweans are spared the barbaric horrors of torture.

If anything, human rights defenders note with grave concern that the list of victims of torture appears to be growing faster under Mnangagwa, who seized power from long-time ruler, Robert Mugabe, in a 2017 coup and promised to deliver “a new democracy.”

Upon arriving at Harare’s Robert Mugabe International Airport from the Maldives, where they had attended a civil society workshop, Mombeyarara and six colleagues were, on 20 May 2019, seized by state security agents who accused them of having undergone military training for the purpose of overthrowing the government.

Three months later, Mombeyarara and a colleague were separately abducted from their homes by armed men and tortured.

The criminal case never took shape, but Mombeyarara had to undergo several corrective surgeries as a result of the torture that he suffered.

Other recent victims of torture include legislator Joanna Mamombe and her two opposition colleagues who, last year, were curiously “abducted” from police cells and went on to be subjected to horrendous torture, including sexual abuse.

Apart from members of the political opposition, other victims of torture include teachers, doctors and nurses, trade unionists and even comedians, all of whom President Mnangagwa’s government regard as threats to his contested rule.

Most of the victims so far have been abducted from their homes in the middle of the night by armed men and were subsequently tortured.

In 2019 alone, more than 50 abductions and torture cases were reported, and none of them were accounted for. This prompted Amnesty International to conclude that a State-sanctioned crackdown against human rights defenders, civil society leaders and members of the opposition, including abductions and torture, has been underway in Zimbabwe.

“We are witnessing a violent crackdown on activists and civil society leaders, with authorities using some of the brutal tactics seen under the government of Robert Mugabe,” Muleya Mwananyanda, Amnesty International’s Deputy Regional Director for Southern Africa said then. “Instead of listening to protestors’ concerns about the economy, the authorities have used torture and abduction to crush dissent and instill fear.”

Africa Torture Watch, a report by the African Commission on Human and People’s Rights (ACHPR) lists Zimbabwe as one of the only two African countries – out of a continent of 54 nations which are full members of the United Nations – that have avoided signing the United Nations Convention Against Torture and Other Cruel, Inhuman or Degrading Treatment or Punishment (UN-CAT) and its Optional Protocol (OP-CAT).

The other country is Tanzania, the east African nation whose human rights record deteriorated fast under the watch of its late hardliner leader, John Magufuli, who died in March this year.

Seeing that nothing is happening to end the use of torture, Veritas Zimbabwe, a local legal and legislative watchdog in mid-June unveiled a Model Bill Against Torture which he started sharing with legislators, human rights organisations, and torture survivors, among other stakeholders, with the hope that Parliament would use it as a basis for coming up with a legislation that effectively outlaws torture in Zimbabwe.

In coming up with this Model Bill, Veritas noted that the various pieces of legislation in the country’s Constitution are woefully inadequate, hence the need for a comprehensive Act that explicitly criminalises torture and provides redress for victims.

“It is sometimes suggested that these constitutional provisions and our criminal law render it unnecessary to take further steps to punish and combat torture.  Past experience and our history give the lie to that suggestion – Zimbabweans cannot claim that torture does not occur here, and indeed it occurs to some extent throughout the world,” said Veritas.

According to Veritas, a comprehensive Act penalising torture is needed to do the following, among other things:  “To flesh out and give ‘teeth’ to our Constitution, which in Section 53 prohibits physical and psychological torture and cruel, inhuman or degrading treatment or punishment.”

It also seeks “to show that Zimbabwe accepts and takes seriously the universal norm that torture in all its forms is unacceptable,” as well as “to give weight to the international conventions that Zimbabwe is a party to, which prohibit torture and cruel, inhuman or degrading treatment or punishment, in particular, the Universal Declaration of Human Rights, the International Covenant on Civil and Political Rights and the African Charter on Human and Peoples’ Rights.”

In addition to making it easy for victims of torture (or their dependents) to get redress, the draft Bill also seeks to make torture an extraditable crime.

“This would be a good time for Parliament to fulfill its constitutional duty to ensure that the Constitution is fully implemented by resolving that the government should introduce a Bill against torture,” Veritas pointed out.

“All of us who share a common humanity must be concerned that torture should be eradicated, in Zimbabwe and throughout the world.”

Mombeyarara told FairPlanet in an interview that he is supportive of the initiative taken by Veritas in coming up with this draft Bill.

“Any civil, political or legal position taken against abductions and torture in Zimbabwe is a welcome development and I am grateful to Veritas for sponsoring the Bill,” said Mombeyarara, who together with his colleagues are now suing President Mnangagwa’s government for their torture.

“I have started an initiative called the Zimbabwe Victims of Abductions and Torture Solidarity Trust, which seeks to bring in a survivor-led approach to the healing of memories and to campaign against the scourge of politically motivated abductions and torture in Zimbabwe and to have a fightback campaign of #NeverAgain regarding torture,” he added.

“We have a steering committee with other survivors and we will actively back such initiatives.”