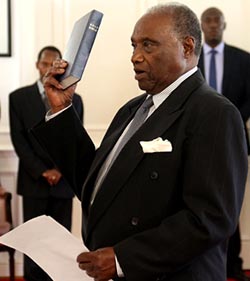 THE National Transitional Justice Working Group (NTJWG) is considering an approach to the Constitutional Court seeking legal clarification and, possibly, extension of the 10 years allocated to the National Peace and Reconciliation Commission.
The commission was established in the 2013 constitution, but the constituting Act was only gazetted last December, leaving the body with less than five years to restore peace and help heal the nation of various historical outrages.
Tafadzwa Christmas, a lawyer with the Zimbabwe Human Rights Forum which is member of the working group, said the delay in operationalizing the commission is supposed to be compensated for to ensure the agency has enough time to carry out its mandate.
“The constitution spells out the effective date which means it is as good as started operating in 2013 but there is no explanation as to what happens since it didn’t start work then,” Christmas said on the side-lines of recent NTJWG workshop held in Harare.
“According to our thinking, we can only get this answer in the courts. It now requires that we go to the courts and seek clarification on whether its 2013 or when the Act was promulgated.”
The commission was due to begin consultations for its strategy this week without a chairperson since the death of Cyril Ndebele in 2016.
Participants at the Harare workshop felt whatever is done in the interim might be declared null and void when the new chairperson is appointed, a situation which would mean wasting state resources and time.
“It means this commission is working without a chairperson. At law, the commission should have a chairperson. According to law (the chairperson) should also be highly competent on matters to do with the NPRC,” queried Christmas.
Civil society groups had also hoped that the recently adopted National Peace and Reconciliation Act would spell out the procedure on how the commission goes about achieving its purpose.
“Those who lost children in the liberation war, the Murambatsvina victims, those beaten in 2008, will all be asking ‘can we come too?” Christmas said.
“It should specify who will benefit, who is the victim, whether perpetrators will be arrested, or victims will receive reparations. How will the victim be protected?
“Would they be free to talk in the presence of their perpetrator while unsure of what will happen to them when they go back home?”Advertisement