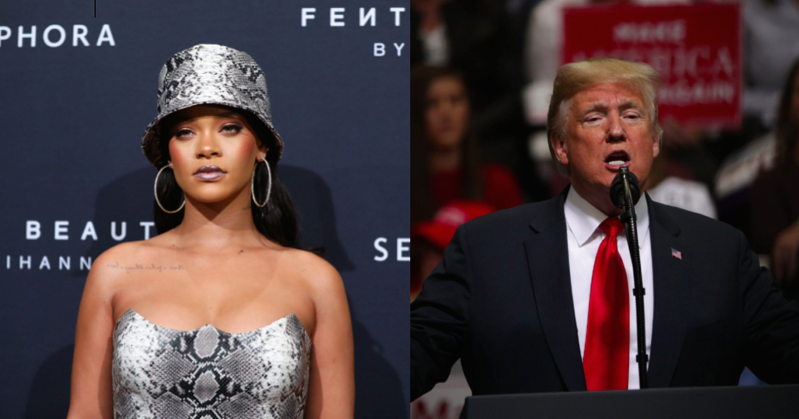 If there’s one woman in music who won’t hold back from telling us what she thinks, it’s Rihanna.

Given that Rihanna recently reportedly turned down the gig of a lifetime – the Super Bowl half time show – over her support for Colin Kaepernick, it’s clear she isn’t afraid to stick to her principles.

Riri has become the latest music icon to condemn Donald Trump for using their music at his rallies. She even branded the rallies “tragic” on Twitter when someone informed her that Trump was playing her music.

Apparently Rihanna’s 2007 hit ‘Don’t Stop The Music’ was played at a rally in Chattanooga, Tennessee. But the 30 year-old Bajan singer resolved to put a stop to it.

She also encouraged Florida voters to return the right to vote to prisoners who have been released from prison.

Currently, people who have been incarcerated in Florida are banned from voting for life – a law some say is designed to stop certain communities from voting.

Rihanna isn’t alone in asking Trump not to play her songs. Pharrell Williams is reportedly sending Mr Trump a legal challenge over his use of the song ‘Happy’, which he astonishingly walked on stage to just hours after the Pittsburgh shooting.

Trump’s presidency has certainly been giving off ‘Disturbia’ vibes so far, but it remains to be seen whether Americans will tell him and the Republicans to ‘Take a Bow’ when they go to the polls on 2 November.