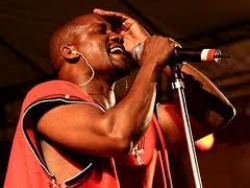 MUSIC fans in Bulawayo missed a rare opportunity to witness two African musical powerhouses share the stage, when Oliver Mtukudzi’s last minute withdrawal forced South African star Ringo Madlingozi to go it alone.
Mtukudzi pulled out of the Friday night show at the last minute due to illness.
The two had been billed to share the stage at the Large City Hall.
About three hundred people turned up for what had turned into a one man show but Ringo handled the situation like a professional he is.
The Xhosa vocalist, whose ballads are driven by the message of love, dished out some of his hit songs which have over the years endeared him with his multitude of fans across the world.
The Valentine Day mood galvanised his performance which left the small crowd satisfied even after they were forced to pay the previously advertised $20 entry fee.
The show kicked off close to midnight with local dance company, Inkululeko Yabatsha School of Arts (IYASA) warming the stage for the main attraction.
Thereafter Ringo, backed by a live band, took to the stage sending the crowd into a frenzy.
His opening track, Kum Nakum, got the crowd singing along and set the tone for the rest of his two hour slot.
He churned hit after hit, belting outs tracks like Thando Novuyo, Ngiyagodola and Into Yami, among others.
Tuku’s absence was heavily felt when Ringo sang, Into Yami, the version which features former’s husky voice.
In order to compensate for his friend’s absence, Ringo even attempted to sing the Shona verses in the song much to the delight of his fans.
In a post-performance interview with journalists, Ringo said while he enjoyed himself on stage, he was hit hard by Tuku’s absence.
“I had a good time and it was wonderful. Zimbabweans welcomed me and I really felt at home. When one is older, different ailments affect us and I’m hoping for a speedy recovery for Mkoma Tuku,” said Ringo.