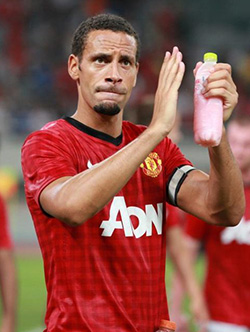 FORMER England defender Rio Ferdinand will leave Manchester United after the Old Trafford club did not offer the central defender a new contract.
Ferdinand, 35, played in United’s final Premier League game of the season in a 1-1 draw at Southampton.
He made over 400 appearances over 12 years at Old Trafford, and apparently intends to continue playing next season despite being linked with a possible role as a TV pundit.
He leaves the club having six Premier League titles, the 2008 Champions League, the FIFA Club World Cup, two League Cups and five Community Shields.
“I have thought long and hard over the last few months about my future and, after 12 fantastic years playing for what I regard as the best club in the world, I have decided the time is right for me to move on,” said Ferdinand.
“I joined Manchester United in the hope of winning trophies, and never in my wildest dreams could I have imagined how successful we would be during my time here.
“There have been so many highlights, playing alongside some great players who have become good friends, winning my first Premier League title and also that fantastic night in Moscow are memories that I will cherish forever.”
Ferdinand joins fellow defender Nemanja Vidic in departing Old Trafford, with the Serb heading for Inter Milan this summer. As a result United will have to enter the transfer market for at least one new centre-half to compete with Phil Jones, Chris Smalling and Jonny Evans.
“Circumstances didn’t allow for me to say goodbye the way I would have liked but I’d like to take this opportunity to thank my team-mates, staff, the club and the fans for an unbelievable 12 years that I’ll never forget. Winning trophies I dreamed about as a kid came true at this great club,” Ferdinand added.
“I am feeling fit and healthy, ready for a new challenge and looking forward to whatever the future holds for me.”
Ferdinand was born in South London and, after playing at the famous Senrab boys club, came through the ranks at West Ham.
A ball-playing centre-back with strong positional awareness, he soon earned England honours before making an £18 million move to Leeds United in 2001, aged 22.
He went on to play two seasons at Leeds before joining Manchester United for a British transfer record £30m, the second-biggest fee for a defender worldwide.Advertisement

While immensely successful at Old Trafford, his spell in Manchester was not without controversy: he served an eight-month ban for missing a drugs test in 2003, and was ruled out of Euro 2004 as a result.
He was also fined £45,000 by the FA for retweeting a comment calling Chelsea defender Ashley Cole a ‘choc ice’ during the fall-out of John Terry’s racial insult towards his brother, QPR’s Anton Ferdinand.
However, Ferdinand – who grew up on one of Europe’s toughest estates – has pumped money into his ‘Live the Dream Foundation’, a development programme aimed at helping young people out of poverty, and has managed a succession of business and media ventures in fashion, music and television.