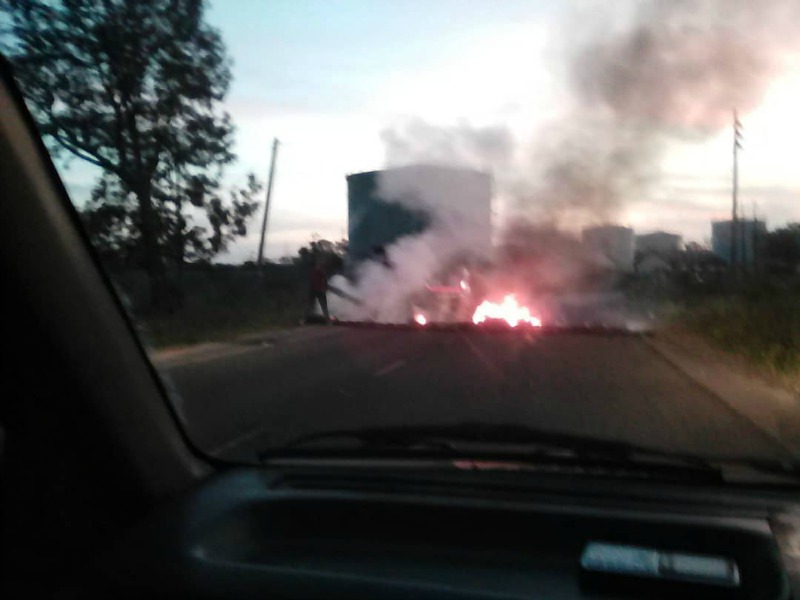 By Nkosana Dlamini and NewZimbabwe.com Correspondents

ANGRY mobs barricaded roads in Harare’s residential areas while many failed to go to work and school as Zimbabweans reacted bitterly to worsening hardship triggered by a weekend hike in fuel prices by President Emmerson Mnangagwa’s government.

The situation was also said to be tense in Bulawayo as police were engaged in running battles with angry citizens.

This follows calls by the Zimbabwe Congress of Trade Unions and like-minded groups for a national shutdown to protest price increases and government’s failure to remedy the crisis.

In Harare, people burnt tyres and blocked kombis from transporting passengers into the city centre.

Traffic trickling into the city centre was little in the morning as people were either barred from driving into town while some chose to simply park their vehicles at home as fuel has been priced beyond their means.

Private motorists in some areas were also prevented from offering lifts to passengers. 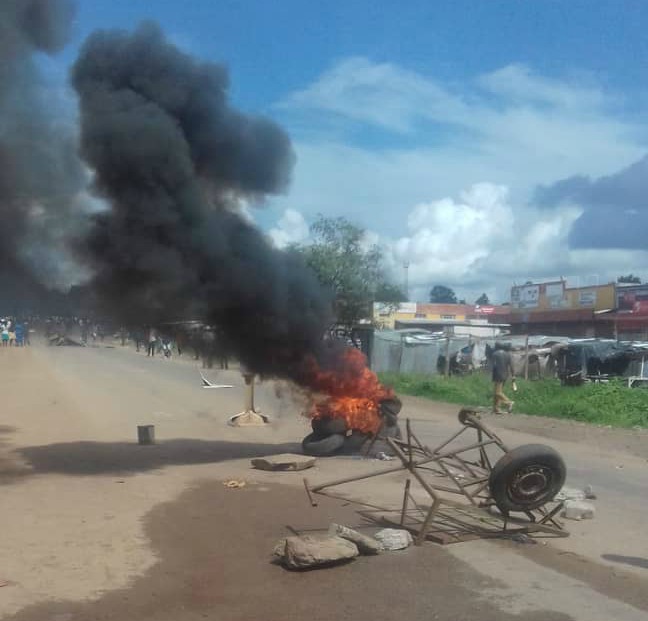 Some of the social media images circulating 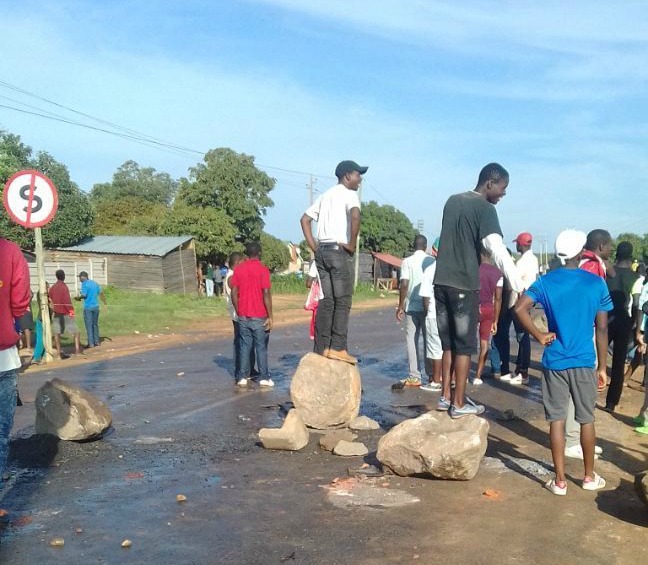 In the CBD, the early hours of the day were calm as people came into town but the situation turned hostile as youths were involved in running battles with police who were forced to discharge teargas canisters in a bid to disperse them.

The city popular mall, Joina City was forced to close as the situation became tense.

Downtown Copacapana area was also a battle zone between ant-riot police and youths. 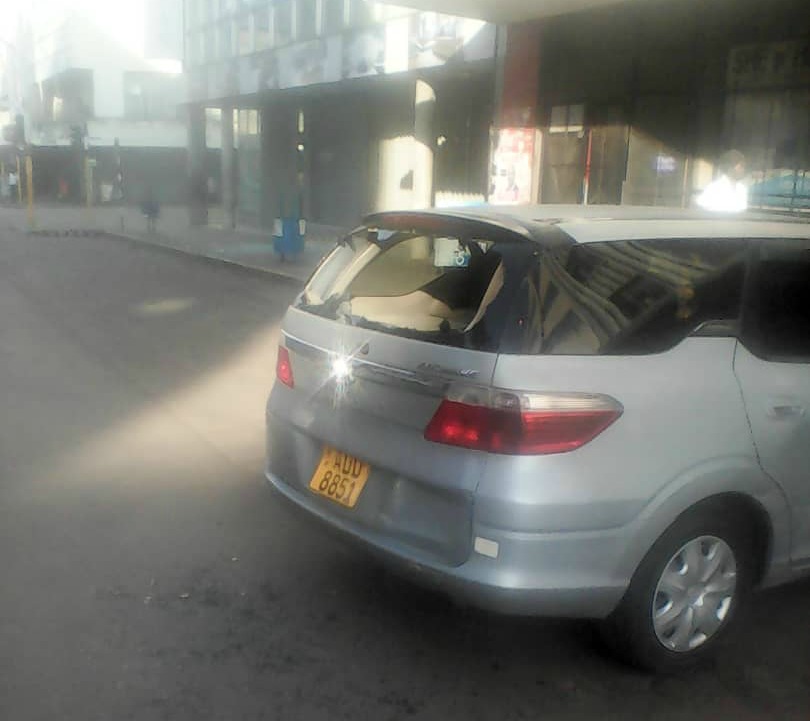 Parents from schools in suburbs close to the city centre were seen picking up their children as learning was stopped by failure by some teachers and some pupils’ to report for school.

NewZimbabwe.com deputy editor Nkosana Dlamini was called to come and pick up his primary school daughter by officials who said the situation was chaotic as teachers did not report for work.

“Can you please come and collect her, the situation is upside down,” he an officail without giving further details.

Zimbabwean teachers said last week they were going to be reporting once a week starting this week while insisting this was consistent with paltry wages they were getting from government. 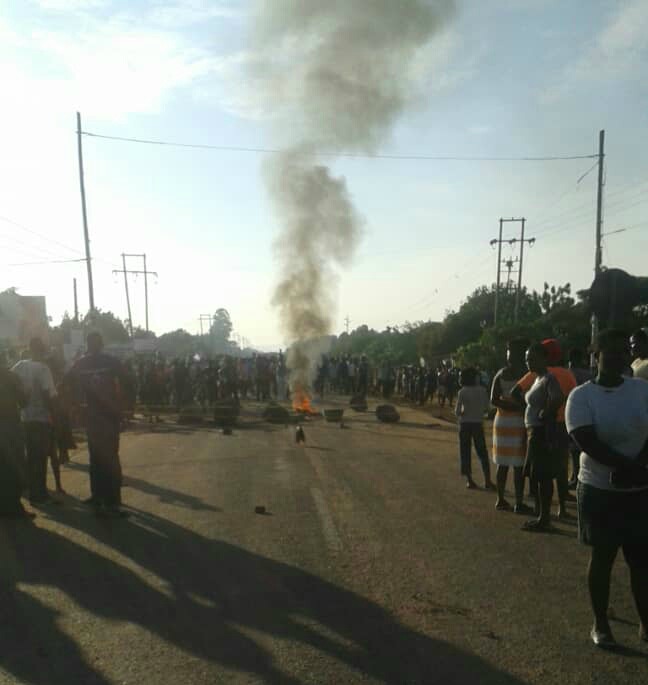 Police in Bulawayo engaged in running battles with protesters in the CBD and some suburbs as chaotics scenes also engulfed the country’s second largest city.

The protests erupted around 9am in the morning with commuter omnibuses barred by protesters from ferrying passengers into the CBD.

In high density suburbs like Cowdray Park, Nketa, Nkulumane, most commuters were stranded as rowdy protesters used boulders and bins to block most of the roads forcing commuter omnibus operators from servicing their routes.

A handful of protesters responded to social media messages distributed Sunday calling for people to gather at the Bulawayo City Hall to march in protest against the fuel price increases.

The group of about 100 placard waving protesters, who were singing the popular protest protest song, “Into Oyenzayo Siyayizonda (We do not like what you are doing) marched from the City Hall towards Tredgold Building which houses the Bulawayo Magistrates courts.

The protesters broke down barricades that had been put along Herbert Chitepo, in preparation for the opening of the 2019 legal year at the Bulawayo High Court.

MDC youth leader and ward 1 councillor Mlandu Ncube, who was part of the protesters said such protests will continue until President Mnangagwa stepped down.

“We will continue to protest until President Mnangagwa steps down,” vowed Cllr Ncube.

Police were forced to water canons to try and quell the protests.

Tear gas canisters were fired like confetti, forcing protesters and onlookers to disperse.

Shop owners were left counting the costs after a Choppies outlet in Pumula East and Entumbane were looted while a pharmacy at Nkulumane shopping centre was also ransacked and some of its stocks were looted.

A police vehicle was also overturned in Pumula East suburb.

At around midday, the city centre resembled a ghost town as police had dispersed people and shops had shut down operations.

Our correspondents in Mutare and Rusape said the situation was calm but shops in Mutare were closed while some were removing their goods from the shelves fearing incurring losses that may arise in the much anticipated event of US dollar rates shooting up again.

Schools were opened in Mutare but children were seen playing at the grounds while education inspectors were moving around schools to access the situation.

Some shops withdrew products from shelves and were only selling bread.

Social media was awash with images of the skirmishes from Harare and Bulawayo which could not be immediately verifiable.