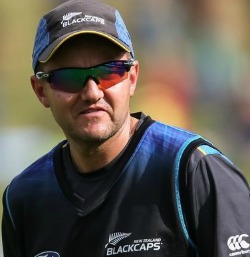 THE New Zealand men’s cricketers are flying out to Zimbabwe for two Tests, knowing full well that the security situation in the troubled country could change for the worse, endangering the tour.
Coach Mike Hesson said he was confident the matches will go ahead.
“Yeah I am, absolutely. I mean there’s nothing to suggest that it won’t at this stage,” Hesson said.
We’re being pretty well briefed in terms of what’s happening.”
“Obviously (we’re) heading to South Africa for seven or eight days, if anything changes I’m sure we’ll be given plenty of instruction, so we’re very confident we’re getting up to date information.”
A delay in paying wages to public workers has sparked a strike and had President Robert Mugabe warning of a plot to overthrow his ruling ZANU-PF party.
Harare ground to a halt on Wednesday as people stayed at home while foreign banks and most businesses shut down, in one of the biggest protests against high unemployment, an acute cash shortage and corruption for nearly a decade.
Strike organisers have said they plan to continue the action until Mugabe, in power since independence from Britain in 1980, falls. A spontaneous social media movement has coalesced into the biggest uprising against his rule in nearly a decade.Advertisement