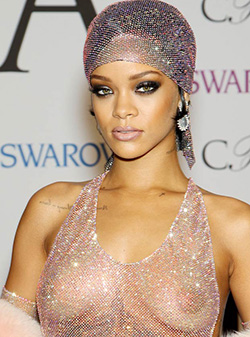 AFTER years of fronting campaigns for some of the biggest names in fashion, it looks like Rihanna is ready to do a Victoria Beckham and boldly venture out on her own.
The pop superstar has hinted that she may soon launch her own fashion line after filing trademark applications in her surname, Fenty.
Although she could simply be protecting her brand from opportunists wanting to cash-in on her name, it seems too much of a coincidence that she purchased the trademarks for categories including clothing, beauty, swimwear and lingerie.
RiRi has yet to make an official announcement about the potential new business venture, but here are just a few reasons why a Rihanna fashion empire could work.
1. She is a fashion-forward trendsetter
When it comes to her style, RiRi is definitely a risk-taker. While many would slam some of her wardrobe choices (think that see-through dress at the CDFA Awards) as ‘too provocative’, the world of fashion welcomes her rebellious streak.
“She takes risks and she marches to her own drum and she knows what she likes,” designer Zac Posen told The Associated Press at the CFDA ceremony where the singer was honoured with the Fashion Icon Award. “It’s been an incredible journey.”
2. She can model her own designs
Before her Instagram account was shut down, Rihanna regularly treated fans to sexy images that showed off her curves.
After fronting campaigns for brands including MAC, River Island and Chanel, she is no stranger to the world of modelling. Rubbing shoulders with models such as Cara Delevingne has definitely influenced the Bajan beauty as she has her catwalk strut down to a tee and her sultry pout is effortless.
It is easy to see why Balmain’s head designer Olivier Rousteing choose her as his muse. There’s no denying it- she is simply stunning.
3. She has a dedicated fanbase
We are pretty sure Rihanna could sell snow to eskimos, but with her army of fans (aka the Navy), she already has willing customers eager to buy her products. Boasting 36.7 million followers on Twitter alone, the 26-year-old stands to make a lot more dollars as a fashion mogul.
4. She has lots of celebrity friends
Getting a celebrity to endorse a new product if you are an upcoming designer isn’t always easy – unless your name is Rihanna of course!Advertisement

We are pretty sure that her little black book is filled with stars that would jump at the chance to front her campaign. Katy Perry, Justin Bieber, Beyoncé and Chris Martin are just a few people that spring to mind.
5. Anything Posh Spice/Victoria Beckham can do…
Victoria Beckham’s success story is proof that Rihanna can make it as fashion mogul. The former Spice Girl and WAG has managed to transform herself from Posh Spice to a respected fashion designer with her own label.
Those that may have laughed at her questionable wardrobe choice back in 90s now applaud her awe-inspiring collections. And there’s no reason why Rihanna’s leap from music to fashion couldn’t work too.