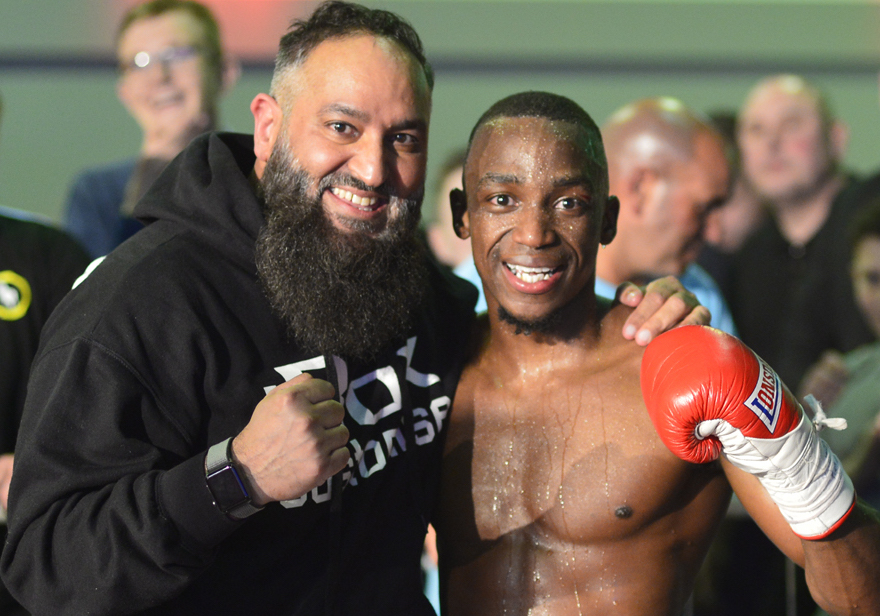 Joe Maphosa with his trainer Phil Jeffries
Spread This News

HIGHLY rated Zimbabwe-born boxing prospect Joe Maphosa says he will be aiming for nothing short of victory when he faces former champion Craig Derbyshire in battle for the vacant English super-flyweight title at the Rainton Arena in the United Kingdom on September 10.

The 27 year-old who was born in the border town of Beitbridge in Zimbabwe’s southern part of the country before migrating to England with his parents at the age of nine is on the verge of taking his fledgling career to the next level.

After a successful amateur career in which he represented Great Britain, winning a number of accolades, Maphosa has won all his 10 fights so far since turning professional in 2017.

The unbeaten Thornaby-based fighter will now have an opportunity to take his career to the next level when he takes on Derbyshire for the English super-flyweight title which has been vacant since 2019.

It will be a case of third time lucky for Maphosa as his confrontation with former champion Craig Derbyshire has been postponed twice as the promoters faced logistical difficulties due to the Covid-19 pandemic.

Speaking ahead of the fight an excited Maphosa who is affectionately known as Smokin’ Joe in British boxing circles said he is relishing the opportunity to register what would be the biggest win of his career thus far and a stepping stone to opportunities to fight for bigger titles.

He says he will be dedicating the fight to his fans in Zimbabwe.

“On September 10, I am lifting the Super Flyweight title, whatsoever. It has been a very exhausting wait, but I have been patient with the process and now it is do-or-die,” he said ahead of the title fight.

“This fight is important to me because I am hopeful that it will improve my ranking as well as lift my country’s flag high. In short, I am dedicating it to my fans in Zimbabwe, who have been wishing me the best all along.

“And to my fans in Teesside, I won’t disappoint them, the title is coming home with pride, I am very confident.”

Maphosa admitted that it will not be an easy fight as he faces Derbyshire, who himself is a seasoned campaigner in this category.

“I don’t underestimate my opponents because fighters, boxers come in different packages and they have different techniques and skills.

“I am just hoping to have a good day in the ring. He is a big name in this trade and he is a former title holder which makes this very interesting and probably challenging for me, but I hope to succeed even if it is difficult,” Maphosa added.

MTK Global will be working alongside well regarded mentor Phil Jeffries who has been tasked with guiding Maphosa’s career.

Maphosa, who is affectionately known as Smokin’ Joe in British boxing circles, is extremely excited about his future.