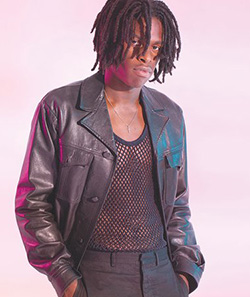 NEW YORK: What do Stevie Wonder and Kylie Jenner have in common? They’re both fans of rising R&B singer Daniel Caesar.
The golden-voiced Canadian singer, who also counts Coldplay’s Chris Martin, Rick Rubin and Erykah Badu as admirers, has built a strong celebrity fan base, thanks to his smooth, soulful R&B sound.
Caesar calls Wonder “one of my favourite songwriters of all-time,” and said meeting the iconic musician left him star-struck.
“He came in and asked to hear (my) song again. And that was probably the craziest part to see Stevie Wonder vibe out to a song I wrote,” Caesar, 22, recalled. “I was very shook. … I’ll never forget that moment.”
Caesar’s encounter with Jenner was similar. She attended a listening party for his full-length debut album, “Freudian,” released in August.
“I was honoured. She’s really dope, very down-to-earth. She introduced herself to me the first time I met her,” he said. “She’s like, ‘Hi, my name’s Kylie.’ I’m like, ‘Yeah. I know.’”
“Freudian,” the follow-up to several EPs, debuted at No. 16 on Billboard’s R&B/Hip-Hop albums chart. The project was produced by Matthew Burnett and Jordan Evans, the duo who produced Eminem’s Grammy-winning No. 1 hit “Not Afraid,” as well as songs for Drake and others. Burnett and Evans also manage Caesar.
Caesar released “Freudian” independently, though he said he and his team met with major record labels to see their vision.
“We’d go to the meetings and some were good and some weren’t as good,” said Caesar, thinking that the label executives “can’t possibility care about what we’re doing as much as we do.”
“We decided to bet on ourselves. And I’m happy we did,” he said.

Apple Music has supported the project, picking Caesar to be its “Up Next Artist” for September. The album’s lead single, “Get You,” recently reached gold status, and Caesar earned nominations at this year’s BET Awards and the JUNO Awards.
“It’s reassuring because we just made this music ’cause we like how it sounded, ’cause we wanted to make it. And the fact that it’s resonating with so many people, it’s reassuring,” he said. “I have more confidence because of it.”Advertisement

Caesar said his influences include Kirk Franklin, the Beatles, Frank Ocean and D’Angelo, whose albums inspired his sound on his debut.
He also said Canada, where he grew up, has had an impact on the album.
“My music’s pretty friendly,” he said, laughing. “Canada has a lot of nice guys.”
Caesar is on a North American tour that wraps Dec. 20 in Toronto, where he recorded the album. He will visit Europe for concert dates next year.
“I was a little nervous about it. I’m a home body and low energy, but I love it,” he said of being on the road. “I don’t want to go home. I kind of want to stay on the road forever.”