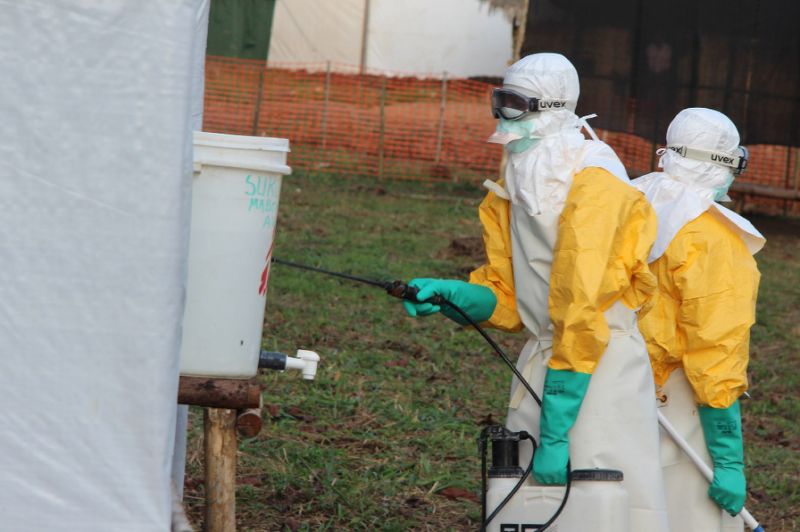 THE risk of Democratic Republic of Congo’s latest Ebola outbreak spreading is “very low” because of the remote area, a Congolese disease expert said on Wednesday as medical teams arrived on the scene.

Ebola has been confirmed in at least two people in the northwestern town of Bikoro. Those cases were discovered after officials last week were alerted to at least 17 deaths linked to a hemorrhagic fever in a nearby area in Equateur Province, according to DRC’s health ministry and the World Health Organisation. There are various hemorrhagic fevers including Ebola.

This is the ninth Ebola outbreak in DRC since 1976, when the deadly disease was first identified. There is no specific treatment for Ebola, which is spread through the bodily fluids of people exhibiting symptoms. Without preventive measures, the virus can spread quickly between people and is fatal in up to 90% of cases.

“The risks of propagation are very low because it is a remote area, it is about 200km from Mbandaka, the capital of the province of Equateur … so it is unlikely that a patient can leave this area and go to Mbandaka or Kinshasa,” the capital, said the director of the National Institute of Biological and Bacterial Research, Dr. Jean Jacques Muyembe.

“I think it is an epidemic that we will quickly master.”

WHO has allocated $1m from its Emergency Contingency Fund to support response activities over the next three months. The Africa Centres for Disease Control and Prevention said it has set aside $250 000 for response to the outbreak while mobilising a team with experience in previous Ebola outbreaks.

The aid group Medecins Sans Frontieres said it has a team in Bikoro that includes medics, water and sanitation experts and an epidemiologist.

None of the Ebola outbreaks in DRC was connected to the massive outbreak in Guinea, Liberia and Sierra Leone in West Africa that began in 2014 and left more than 11 300 dead.