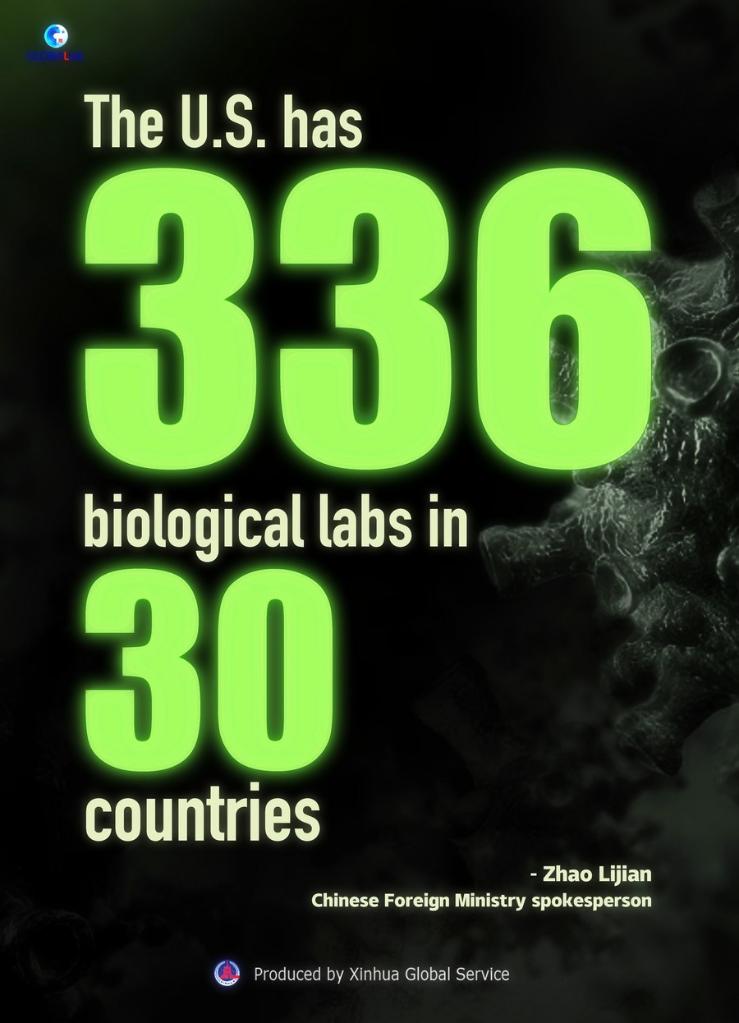 STRONG evidence has emerged that the United States embassy in Ukraine deleted documents which implicated the US for funding a series of laboratory facilities for the production of biological weapons in that country.

Such revelations vindicate China which last year stridently made suggestions that the conduct by US of secret biological and chemical laboratories could be blamed for the outbreak of Covid-19 virus.

China made these suggestions within the context of discussions of Covid-19 virus origins, which had sought to deflect from a wide-ranging inquiry to focus on China.

The US refused to put the bio-labs up for investigation by international experts.

Evidence pointed out that the US had hundreds of these facilities at home, military installations and abroad.  According to information available, Covid-19-like diseases had previously broken out near the facilities, and indeed that there were poor security measures at some of the places, making accidental leaks possible.

Now the crisis in Ukraine has brought back the issue into sharp relief, once again.

Only now, the US appears to be holding the smoking gun – and the world must hold it to account.

It has emerged that Ukraine stored dangerous pathogens at laboratories designated for cooperative research and transfer to the US.

Labs in Ukraine have reportedly been operating on the command of the US Department of Defense and the US invested over US$200 million in them.

Subsequently, they have run a number of projects of dangerous biological weapons. One of them, the UP-4 project, studies the possibility of the spread of avian viruses through migrating birds.

The R-781 project considers bats as carriers of pathogens that can be transmitted to humans. Another project code-named UP-8 is aimed at studying the Congo-Crimean hemorrhagic fever virus and hantaviruses.

This implies that the facilities experiment with these dangerous diseases to see how they can destroy man and nature.

By simple inference, what the world has grappled with a regarding number of outbreaks of diseases that cannot be divorced from the above experiments.

This makes America a huge suspect and a candidate for global investigation.

Recently, the spokesman of the foreign ministry of China Zhao Lijian, spoke with clarity on the issue.

“I want to stress that the concerns of the international community about US biological labs in Ukraine boil down to what the US has done and what has been hidden from the public. Why is the US the only party that is opposed to establishing a BWC verification regime? Why not open these bio-labs to independent investigation by international experts? I suggest you ask the US such questions,” he said.

The Russian state media exclusively revealed that the US was secretly funding the production of biological weapons in Ukraine.

US and secret bio-labs saga

In 2021, it emerged that the Covid-19 coronavirus was made and leaked from a military installation in Frederick, Maryland in the US.

It was revealed that this was once the centre of the US biological weapons programme and that it housed biomedical labs responsible for researching viruses including Ebola and smallpox.

The origins of the Covid-19 virus were also connected to a US coronavirus expert Dr Ralph Baric and a team of researchers at Fort Detrick who created the human-infecting coronavirus.

According to the Chinese ministry, at the peak of the Covid-19 pandemic in 2020, the Covid-19 outbreak was introduced to Wuhan by members of the US army who had visited the city that October.

Ukraine is one of the proxies used by the US to run a number of bio-lab facilities.

This is part of a broader expansionism by the US in opening bases and facilities to house weapons, conduct training and use as potential launch pads against enemies.

This has taken place in a number of regions throughout the world, and it is worrying because of its implications on global security and peace.

In  Africa, many countries have been worried about the proliferation of the Africa Command, AFRICOM.

AFRICOM is the Europe-based military platform for advancing the US strategic interest in Africa-has been a vehicle use by the US to mark its presence on the continent through the consolidation of military-to-military relations with over 51 African countries to date.

Through AFRICOM, the US successfully infused its presence in a subtler way since Africa has been largely opposed to the establishment of military bases on African soil.

There is no denying the fact that the US has played a very disruptive role in global stability. The US’ military might is not a force for good. It is a force of evil – whose worst expression was how the US leveled two Japanese cities Hiroshima and Nagasaki with atomic bombs at the end of the Second World War. Up to now, those two cities are still inhabitable, and the world is in danger of this arsenal that the US supremely commands.

On the other hand, despite claiming to be a beacon of liberty and justice, the US has been directly or indirectly involved in well-funded major conflicts around the world for example in Iraq and Afghanistan.

The US remains the biggest arms exporter, the biggest military spender and biggest regime changer in the world.

If one were to pin the origin of Covid-19 to the US’ military’s biochemical weapon misadventures, it means that the US is responsible for the Covid-19 pandemic which has killed millions of people all over the world.

So far, according to the Johns Hopkins University, over six million deaths have been reported across almost 200 countries in the world and this equates to war crimes or mass genocide.

There is widespread agreement among economists that the Covid-19 pandemic has had severe negative impacts on the global economy. The pandemic caused heightened inflation and its impacts disrupted livelihoods across the world.

The US must be held accountable for the spread of the Covid-19 pandemic and the millions of people who lost their lives as a result of this biological weapon.

Why the world should support efforts to bring US to account

The events currently unfolding in Europe, in particular the smoking gun of revelations that the US has been conducting dangerous experiments in Ukraine, must bring the world to support Russia and China in their concerted effort to expose the vice.

The world cannot be a safe place with dangerous weapons on the loose.

The US poses a present and continuing danger to global peace and security, and countries of the world must be sounding the alarm and cooperating to see how this present danger can be solved.

The world is at a most dangerous time

The actions of US in manufacturing and mishandling biological agents, which could include Covid-19, are very grave and constitute a threat to humanity.

Ironically, the US president Joe Biden just a few days ago labelled Russian president Vladimir Putin a war criminal and condemned him for his military assault on Ukraine.

There should be enough pressure for an international investigation into the role of the US over the production of biological weapons and possibly Covid-19 which indicatively leaked from some of its secret bio-lab facilities.

African countries such as Zimbabwe should follow the lead of China and Russia in discussing this issue.

The world’s peace and stability depends on it.